Me on In Real Life 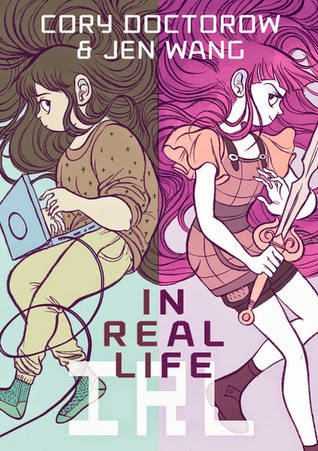 Anda loves Coarsegold Online, the massively-multiplayer role playing game that she spends most of her free time on. It's a place where she can be a leader, a fighter, a hero. It's a place where she can meet people from all over the world, and make friends. Gaming is, for Anda, entirely a good thing. But things become a lot more complicated when Anda befriends a gold farmer - a poor Chinese kid whose avatar in the game illegally collects valuable objects and then sells them to players from developed countries with money to burn. This behavior is strictly against the rules in Coarsegold, but Anda soon comes to realize that questions of right and wrong are a lot less straightforward when a real person's real livelihood is at stake.

In Real Life is an exploration of many things. Gaming, economics, friendship, wealth, poverty, labour, heroes and villains. There are two worlds, both in real life and in gaming: what's on the surface, the sparkle and excitement that's constantly promoted, and what's underneath, the downtrodden. When Anda glimpses that underneath side, she learns the hard way that nothing is easy, that right and wrong aren't simple terms anymore, and that fighting back isn't always the answer.

Anda is a sweet girl. She's nice, and she's a bit lonely, she doesn't seem to have many friends beyond those who play D&D. When she's introduced to Coarsegold she's found her place to be, a place where she can expressive and happy, where she can meet new people who like the same things she does. All she sees is the camaraderie, the working together.

It's not that big a part in the book, but there's a moment near the beginning that I found interesting. When Coarsegold is first introduced, the girls in Anda's class are asked if they game, and then if they game as female characters. Out of the three shown, none of the girls keep their hands raised. After reading Guy in Real Life by Steve Brezenoff earlier this year, a book about a teenage guy who games as a female character in a game similar to Coarsegold, I found this moment curious. Girls are playing as guys and guys are playing as girls. It's an interesting look at how we want to appear to others online, and at gender.

Anda certainly gets a crash course in economics, labour, and poverty here, learning that gamers will pay other gamers in real life currency to obtain special items and in game currency for them. That that's how some people, like the teenager in China she meets through the game, make money to live. That they have to farm gold for others because their current job pays so little and provides no benefits. Her way of living now seems luxuriant: living in a house with her parents, a computer, good food, a car, good health benefits through her father's job thanks to a recent strike and resolution. Not everyone has the freedom to strike against their employers as they do in countries like the US, Canada, and England (to name a few, I'm sure there are many more). This is eye-opening to Anda, and she knows she can't leave it like this.

While exciting and entertaining, bright and colourful, this book also hits on some harsh truths and consequences, some we forget when wrapped up in the bright lights of games. Anda's story is one of learning, of consequences, of economics, of wealth and poverty, of human rights, and of friendship.

(I received an e-galley of this title to review from First Second through NetGalley.)
Posted by Lindsay at 4:00 AM