Me on These Rebel Waves 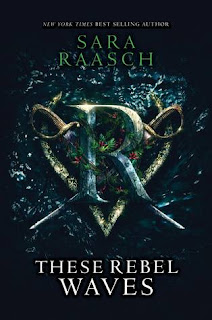 Adeluna is a soldier. Five years ago, she helped the magic-rich island of Grace Loray overthrow its oppressor, Argrid, a country ruled by religion. But adjusting to postwar life has not been easy. When an Argridian delegate vanishes during peace talks with Grace Loray's new Council, Argrid demands brutal justice—but Lu suspects something more dangerous is at work. Devereux is a pirate. As one of the outlaws called stream raiders who run rampant on Grace Loray, he pirates the island's magic plants and sells them on the black market. But after Argrid accuses raiders of the diplomat's abduction, Vex becomes a target. An expert navigator, he agrees to help Lu find the Argridian—but the truth they uncover could be deadlier than any war. Benat is a heretic. The crown prince of Argrid, he harbors a secret obsession with Grace Loray's forbidden magic. When Ben's father, the king, gives him the shocking task of reversing Argrid's fear of magic, Ben has to decide if one prince can change a devout country—or if he's building his own pyre. As conspiracies arise, Lu, Vex, and Ben will have to decide who they really are... and what they are willing to become for peace.

These Rebel Waves is plots and plans and secrets upon secrets. It's adventure and intrigue and survival. It's the past returning, revealing its true intention. It's about people who would see the infirm saved from sickness and an island free from an oppressive ruler. But their missions are never solved that easily.

Lu is a smart, battered, determined young woman. She's fighting hard to see Grace Loray stand on its own, free from Argrid, even if that fighting is done watching and listening to council meetings. It's still work to make sure the island will be free. But there are some things that bother her, make her wonder. Vex is a known stream raider, working illegal jobs and running around under the radar as much as he can. Until he gets caught. Until a demanding young woman walks up to his jail cell, ready to make a deal. Ben is thoughtful. Worried. The deaths of his uncle and cousin still ring true inside him, still make him question his father's plans. Especially when his father comes to him, asks him to research and utilize the magic plants of Grace Loray. Why, when he has named magic evil? Is he being set up, are his true feelings about magic being revealed so he too can burn, or does his father have a plan that would change everything?

This is a rather dense story of political intrigue, secret magic, hope, fear, and freedom. It's intriguing, but it's certainly a lot of plotting and planning, running from place to place in order to either get help or uncover the truth. Or, when it comes to the parts seen from Ben's point of view, it's a lot of hiding his true feelings and being afraid of ending up like his uncle and cousin before everything around him shifts, blasting away his expectations. I was certainly curious as to where Lu and Vex would go and what they would find out, what Ben would discover and what his father's true plans were. And I was intrigued by the magical plants, by there being certain plants on Grace Loray with magical properties and what this meant in terms of healing or battle or missions. I was also interested by the island of Grace Loray itself, the different parts of it and the different groups of people that call it home. Those who went there to make new lives, those who were brought there. Those who hide away, still calling themselves a certain name even though they've never been to the land their ancestors were from. It was interesting to me, thinking about the history of immigration on Grace Loray and some real life comparisons. It was a little long for me, but I'm still curious as to how the next book will play out, considering this is the first in a duology. After the reveals and the ending, I'll be keeping an eye out to see what happens next.

(I received an advance copy of this title from HarperCollins Canada.)
Posted by Lindsay at 4:00 AM