Me on Mortal Gods 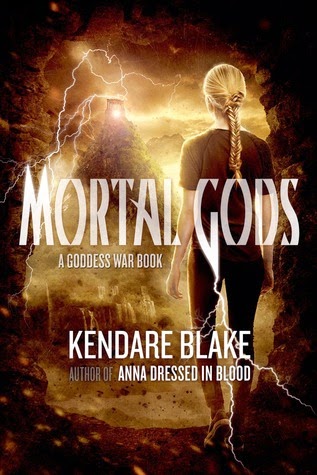 Ares, God of War, is leading the other dying gods into battle. Which is just fine with Athena. She's ready to wage a war of her own, and she's never liked him anyway. If Athena is lucky, the winning gods will have their immortality restored. If not, at least she'll have killed the bloody lot of them, and she and Hermes can die in peace. Cassandra Weaver is a weapon of fate. The girl who kills gods. But all she wants is for the god she loved and lost to return to life. If she can't have that, then the other gods will burn, starting with his murderer, Aphrodite. The alliance between Cassandra and Athena is fragile. Cassandra suspects Athena lacks the will to truly kill her own family. And Athena fears that Cassandra's hate will get them ALL killed. The war takes them across the globe, searching for lost gods, old enemies, and Achilles, the greatest warrior the world has ever seen. As the struggle escalates, Athena and Cassandra must find a way to work together. Because if they can't, fates far worse than death await.

Mortal Gods is a book of anger, a book of rage, a book of pain. Nothing is easier for anyone. If anything, it all hurts even more this time around. It hurts because they know what's happened, and they know what's going to happen. And preparing for death tends to leave behind a bitter taste.

Athena's determination and Cassandra's anger, both of them fuel this book. They push over and over, harder and harder. But their vision is blocked by blinders, leaving one only seeing the goal in front of her and the other unable to see anything past her fiery rage. But Athena is getting tired, weary, with more than feathers poking at her flesh. And behind the fire in Cassandra's eyes lies sadness and despair.

So much of this book is preparing. Preparing for war, for battle. Preparing for the end. The end is coming, there's no denying that. But for everyone, what is the end? For the gods, for Athena and Hermes, for Hera and Aphrodite, that end is surely death. Isn't it? They're all crumbling, falling apart. For Cassandra, what is the end? An end to her anger? Will she only be satisfied with Aphrodite and Hera dying at her hands? And then what? Will everything just become normal again? Revenge is never the answer. But what else does she have to give?

But at the end of all of this, how can there be a winner? This is a war between gods, a war of immense power, a war between the diseased and the crippled. How can there honestly be a winner when all of them are dying? I'm genuinely curious as to how this will all end in the next book. I know Kendare Blake books, there won't be a happy ending. All I can do now is sit back and wait for the epic battle.