Hi all! Today's post is a bit different today in that it's a guest post for the blog tour for Bone, Fog, Ash & Star, the final book of Catherine Egan's The Last Days of Tian Di trilogy. :) Plus a giveaway! (Details are below.) 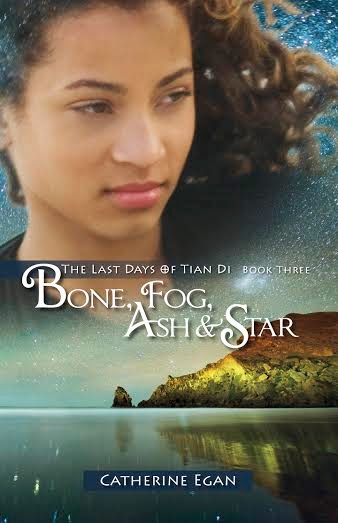 Catherine Egan grew up in Vancouver, Canada, and wrote her first novel at age 6. It was about a group of kids on a farm who ran races. Each chapter ended with "Cathy won the race again!" Since then, she has lived in Oxford, Tokyo, Kyoto, a volcanic Japanese island that erupted and sent her hurtling straight into the arms of her now-husband, Beijing, an oil rig in China's Bohai Bay, and now Connecticut, where she is still writing books (but Cathy doesn't win every race anymore). Her first novel, Shade & Sorceress, won a 2013 Moonbeam Children's Book Award (Gold) and was named an Ontario Library Association Best Bet for 2012 in the Young Adult Fiction category. This was followed by The Unmaking and Bone, Fog, Ash & Star. You can find more on her website, at her blog, on Facebook, and on Twitter (@bycatherineegan). :)

And so, without futher ado, here's Catherine!

This is the last in a series of blog posts on villains; you can check my blog for the full list of villain-posts. Let me know in the comments: who are your favorite fictional villains? Choose villains from books / movies / comic books / TV – just not real life! A winner will be selected by random number generator (I'll post a screenshot) and I will send you a book bundle – all three books in The Last Days of Tian Di series – chock-a-block with villains and their villainy.

An Exchange of Gifts

We don't always recognize the villain at first. He comes sauntering into the hero's world, and she isn't even a hero yet – not without a villain, not without a city to save. She's just a gifted girl who has lost everything but hangs on anyway, in determined stray-cat style. He comes whistling and peddling trinkets, "witch-white," as they call him: "His hair was white-gray like bleached wood, his eyes white-silver like tin, his skin was white as if he were a day dead." It's impossible to know, at first, if he's going to be her salvation or her undoing, as he strolls into the story with a tambourine, more vivid and stranger than anyone we've met thus far.

I've been posting all week about different types of villains. For a villain bent on doing evil, the question is often one of redemption – a glimmer of good is enough for us to allow it. Sometimes the villain feels (or pretends to feel) a deep kinship and connection with the hero and tries to win them over to his or her side, luring them towards darkness. Sometimes he wants to rule the world, become more powerful, or secure the power he has – that's common enough. He may believe his wrongdoing to be righteous, playing the hero in his own twisted version of the story. But this villain is different. This villain didn't start out evil and what he wants is not power or prestige. Evil is probably not the right word for him, even now – or maybe it is. Before, he was a loving brother and uncle, teaching his niece how to swim and do handsprings. Now, he leaves the countryside a ruin in his wake, dragging his monstrous vengeance towards the city that took his sister from him.

Vengeance is not exactly noble or heroic, but still, revenge stories are gripping and most of the time we can get behind the vengeful hero. Inigo Montoya from The Princess Bride is hilarious but really quite moving as well, the comic and oft repeated line becoming oddly powerful when at last he says it to the man he’s been saving it for: "My name is Inigo Montoya. You killed my father. Prepare to die." I remember devouring The Count of Monte Cristo as a teen, chilled and thrilled by the story of a wronged man returning years later and decimating his enemies one by one. We cheer him on, even if some part of us is appalled, even if he's not the sort of fictional hero we'd want to invite over for coffee. The vengeful hero tips into truly villainous territory only when his or her revenge grows so vast and uncontrolled that it swallows the innocent as well.

Anyone who has lost someone – indeed anyone who has loved someone – can empathize with Linay's designs, the depths he descends to, the horrors he is willing to unleash. If you had power to undo it, to bring them back, what would you balk at? What is the world worth to you, without your beloved in it? Why should others live and not the one you loved? Linay lures the terrible half-ghost of his sister down the river, pulling after them a deathly fog that leaves the countryside devastated. Kate is terrified of him – and he is frightening, mad and determined and powerful, with her shadow in a box and strange magic in his hands – but she feels for him too. She has to remind herself: "He does not love me. I do not trust him." But haven’t they both lost the one they loved best? Weren't they both turned out by their own people? Doesn't she understand it, more than she’d like to – his bottomless grief? Why save Lov? she has to ask herself. Why risk her life for the people who put a good woman to death, and the people who watched a woman die and did not care and did not stop it?

It doesn't feel quite right to call Linay a villain, when the true villain of the story, if there is one, is life as we know it: death, grief, cruelty, fear, ostracism, sickness, superstition. Still, anyone bringing death upon a city of thousands counts as a villain, and the beauty of Linay is that he is and does all the very worst a villain can be and do while remaining painfully human and sympathetic. When Kate tells him she is going to stop him, he replies, "I wish you could. I almost wish you could."

In Lov, Linay tells Kate to flee. The cat Taggle wants her to flee. When she sees the stake in the square where witches are burned, for a moment she almost wants to let Linay have his revenge. "That quick death was better than this city deserved." Kate is the hero because she grieves for her father but does not allow herself to be destroyed by that grief. She is the hero because in the grim city of Lov, she remembers how in other cruel places she has been saved by kind people. She is the hero because she can't bring herself to walk away and leave the city to its fate, because she is brave and loving even when there is so little hope for her and so little to love. She finds love anyway, and hope too. Kate embodies the best and withstands the worst, while Linay buckles under the worst and becomes a monster.

This is nothing to do with villains really, but I will say that this book made me cry, possibly more than any book has made me cry, and I am not a big crier over books. That makes it sound like a very sad book, but in spite of the grief and horror in the story, I don't think of it as a sad book. It is a beautiful book, and funny as well (OK, mostly Taggle). Linay in particular stands out for me as one of the most frightening and moving fictional villains I've read, and so any thoughts I have on villains end with him.

Thanks so much for the post, Catherine. Go check out The Last Days of Tian Di trilogy now! :)
Posted by Lindsay at 4:00 AM