Me on Earth & Sky 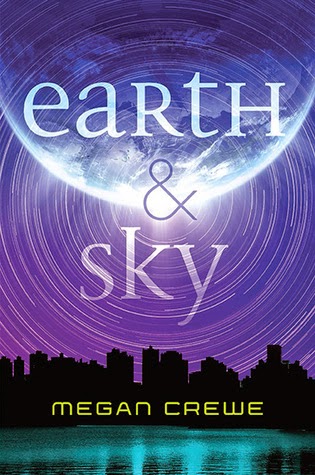 Seventeen-year-old Skylar has always been haunted by fleeting yet powerful feelings that something around her has gone wrong. Those impressions have never seemed to reflect anything real, and have only earned her stares and whispers behind her back. But after she meets a mysterious boy named Win, she learns an unsettling truth: we are not alone on Earth. In fact, visitors from beyond the stars are manipulating our planet and the essential fabric of our world; life as we know it is starting to unravel. And Skylar, and her heightened awareness, just may be the key to our salvation.

Earth & Sky is an exciting adventure with twists, turns, and a number of surprises. What if someone else, someone in outer space, was constantly watching us, had been watching us for decades? Centuries? What if they'd done more than just watch?

Skylar is a perceptive girl, but that perception has lead to a fair amount of anxiety and coping mechanisms. She relies heavily on math and numbers in order to stay calm. Numbers can't be changed. There's always a solution. And so, Skylar can trust numbers. But trust Win? Not so much, considering he just appears out of nowhere. Considering he makes what she thought she knew about the world completely wrong. But that doesn't stop her from helping him.

I liked the world-building when it came to the science fiction aspect, the aliens and their purpose. What the author's had to do is craft a whole other world. A new species with new technology. A species with a curious set of motives, all in the name of science. As well as figure out who they are, what motivates them also had to be figured out, their reasoning behind their actions. Sometimes that's hard enough to figure out with human characters, let alone aliens from outer space.

A fair amount of this book has to do with control. There's the control that Skylar exerts over her world, her faith in numbers to keep everything ordered. But there's another kind out there. What if we weren't alone? What if something, someone, was in control instead of us? What if they controlled our destiny, changing events as they saw fit? What if we didn't even know it was happening?

It's an intriguing proposal, the idea that we are not alone in the universe, the idea that we're not necessarily in control but we're trying to fix it. It raises a lot of questions, especially for Skylar. What if she could change certain events in her past? Would those be for the best? But then what would happen to Win and his mission? This is definitely an interesting book with a solid ending still left open for the rest of the trilogy.

(I received an advance copy of this title to review from Penguin Canada.)
Posted by Lindsay at 6:02 AM