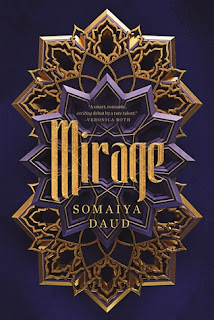 In a star system dominated by the brutal Vathek empire, eighteen-year-old Amani is a dreamer. She dreams of what life was like before the occupation; she dreams of writing poetry like the old-world poems she adores; she dreams of receiving a sign from Dihya that one day, she, too, will have adventure, and travel beyond her isolated moon. But when adventure comes for Amani, it is not what she expects: she is kidnapped by the regime and taken in secret to the royal palace, where she discovers that she is nearly identical to the cruel half-Vathek Princess Maram. The princess is so hated by her conquered people that she requires a body double, someone to appear in public as Maram, ready to die in her place. As Amani is forced into her new role, she can't help but enjoy the palace's beauty—and her time with the princess' fiancé, Idris. But the glitter of the royal court belies a world of violence and fear. If Amani ever wishes to see her family again, she must play the princess to perfection... because one wrong move could lead to her death.

Mirage is a lush and richly imagined tale full of deception and cruelty, full of family, history, faith, and complicated relationships.

Amani is kind and thoughtful, a dreamer. She dreams of writing poetry, dreams of one day receiving a sign from a god or goddess. She dreams of one day seeing a sign as to what she will do, how she will help those she cares about or those around her. But then she's abducted by a regime she despises, forced to work for a young woman who hated their shared heritage. A young woman who looks almost identical to Amani. And so Amani is forced to pretend to be someone she hates, someone cruel and unfeeling about the problems and history of being Kushaila in an empire ruled by the Vath. What else can she do when the lives of her parents and siblings are at stake? What else can she do but follow orders and listen to what happens around her.

There's something so interesting about this book, something that's maybe a little similar to series like The Winner's Curse. Under all the opulence, under Maram's cold rule and Amani's fitting in to be like her, under Amani being drawn towards Idris and her wanting her family to be safe, there's so much talk about empire and colonialism, about culture and family and motivation. Amani is caught between staying alive and potentially making sure her culture isn't completely overwhelmed, while Maram is caught between her father, a Vath of great power and importance, and the history and people of her mother, people who hate her because she's turned her back on them while she looks so much like them. It's a deep and complex tale, one that's only started this this book, and I can't wait to see what happens next with Amani.