Me on The Spiritglass Charade 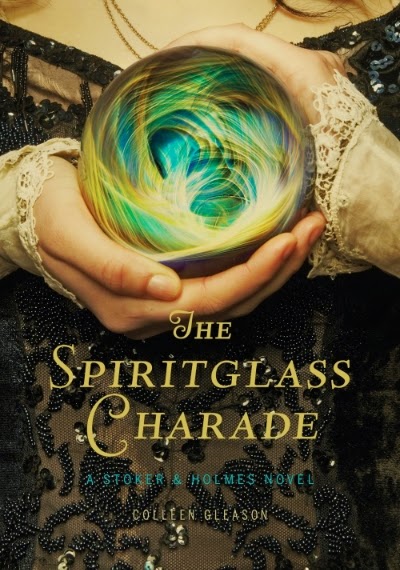 After the Affair of the Clockwork Scarab, Evaline Stoker and Mina Holmes are eager to help Princess Alix with a new case. Seventeen-year-old Willa Aston is obsessed with spiritual mediums, convinced she is speaking with her mother from beyond the grave. What seems like a case of spiritualist fraud quickly devolves into something far more menacing: someone is trying to make Willa "appear lunatic," using an innocent-looking spiritglass to control her. The list of clues piles up: an unexpected murder, a gang of pickpockets, and the return of vampires to London. But are these events connected? As Uncle Sherlock would say, "there are no coincidences." It will take all of Mina's wit and Evaline's muscle to keep London's sinister underground at bay.

What's refreshing is that Mina and Evaline haven't changed a single bit. They're still the same young women from the previous book. One is all-knowing, all-presuming, all-problem solving, and the other is strong and fierce, ready to take up arms and fight back against evil. A mismatched couple, to be sure, but they're slowly coming to understand each other. Both their strengths and their weaknesses are highlighted throughout this mystery involving ghosts, spiritualists, and vampires.

I am wholly intrigued by the setting and the world-building. The mixture of the late Victorian era time period, the inclusion of steam and clockwork-based technology, the lack of electricity, the hints of time travel, the vampires. But the combination of Holmes, a fictional character, and Stoker, a real life writer/author make it hard to suspend my disbelief. There's a tiny scrap of it remaining, and it's because of this. This story is interesting, the characters are complicated, but this one small part still bothers me, and it probably will throughout the series.

But I'm still curious, still interested, still entranced by the mysteries that weave themselves around Mina and Evaline. More questions are asked this time around with only a few answered, and I'm still left wondering about the origins and motives of almost every other character. Mainly Pix. Who is he? If you enjoyed the previous book, if you're interested in steampunk mysteries with clever and flawed leading ladies, you'l probably enjoy this.