It sort of cooled off about halfway through the week, which was awesome, and it looks like it's going to be cool again next week. I really really hope it is, riding public transit when it's really hot out just makes it even hotter and muggy and uggggggggh.

No reviews next week because I'll be off in downtown Vancouver doing the same library volunteer position I've done for the past few summers. My mom asked who the biggest name was of who was speaking or leading a workshop and I paused for a bit. Because it was a tricky question. Depending on who I talk to, it could be Rachel Hartman, author of Seraphina, or Billie Livingston, author of One Good Hustle, or Susin Neilsen of Word Nerd and The Reluctant Journal of Henry K. Larsen fame. Eileen Cook and Joëlle Anthony will also be there. Or the library's writer in residence, who hasn't been announced but apparently is a woman and writes for a teen audience. Who knows? I imagine I'll say on Twitter on Monday morning. ;) 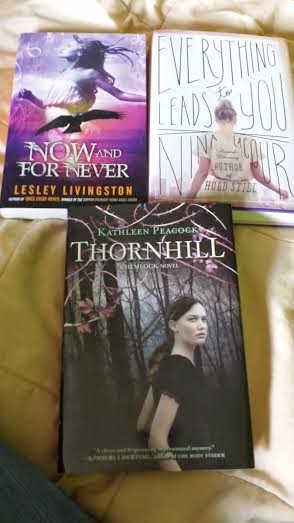 Bought/borrowed/received:
Now and For Never by Lesley Livingston (bought)
Everything Leads to You by Nina LaCour (bought)
Thornhill by Kathleen Peacock (bought)
Chasing Power by Sarah Beth Durst (e-galley from Bloomsbury through NetGalley)
Posted by Lindsay at 8:00 AM