Me on Girl Defective 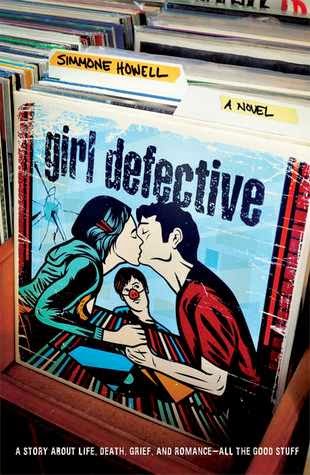 This is the story of a wild girl and a ghost girl; a boy who knew nothing and a boy who thought he knew everything. It's a story about Skylark Martin, who lives with her father and brother in a vintage record shop in St. Kilda and is trying to find her place in the world. It's about ten-year-old Super Agent Gully and his case of a lifetime. And about beautiful, reckless, sharp-as-knives Nancy. It's about tragi-hot Luke, and just-plain-tragic Mia Casey. It's about the dark underbelly of a curious neighborhood. It's about summer, and weirdness, and mystery, and music. And it's about life and death and grief and romance. All the good stuff.

Girl Defective is honest, painful, and realistic. This book is an eye-opening experience for a number of characters, not just Sky, and a coming of age for her. Everyone is defective in some way, every acts and reacts differently in certain situations. Everyone is different.

Who is Sky? What is the world? She's trying to figure it all out, like why people do what they do. Like why her mom left, why her dad hides in records and beer, why Nancy lives carefree and parties, why her brother Gully won't take off that rubber pig snout, and why Luke is so distant and closed off. She's also trying to figure out herself at the same time, like what she wants to do and who she is. Why she keeps all of her mom's old clothes and leaves semi-cruel messages on her website.

The setting seems perfect for a rude awakening coming of age story. Sky's home, St. Kilda, sounds like it's caught between the past and the future. Slightly crumbling, old, rough around the edges. It's a little hard, a little harsh, but it's realistic and also unique. The record store was also an interested place, a number of important things happen in it and above it in the apartment. It's like a time capsule, where classic rock lives on.

Growing up sucks. It's hard, it's painful. It's something that, when we come up against it, we don't want to do it. But growing up is all about navigating those hard and painful times and, hopefully, coming out on the other side. Lessons learned and realized. I think that's what this book is for Sky. She's coming face to face with the idea that things aren't perfect, that people aren't always who she thought they were. That you can't keep things from changing.