Me on Pride & Prejudice (Manga Edition) 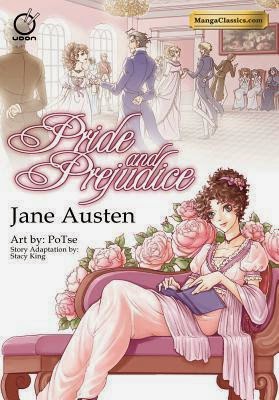 When Elizabeth Bennet first meets eligible bachelor Fitzwilliam Darcy, she thinks him arrogant and conceited, while he struggles to remain indifferent to her good looks and lively mind. When she later discovers that Darcy has involved himself in the troubled relationship between his friend Bingley and her beloved sister Jane, she is determined to dislike him more than ever. In the sparkling comedy of manners that follows, Jane Austen shows the folly of judging by first impressions and superbly evokes the friendships, gossip and snobberies of provincial middle-class life.

I found this to be an entertaining new version of the classic Pride & Prejudice, updated but still so familiar, so faithful to Austen's original tale. As the popularity of comics, manga, and graphic novels continues to grow, as well as the updating and modernizing of classic tales of literature, I see no harm in books like this. Even though I went in knowing the story, I turned each page with excitement, wondering how the story would be portrayed next through the artwork.

The language used by the characters was rather faithful to the time period, perhaps with a few modern terms or inflections. And the artwork is gorgeous, the characters all fully realized with differences to help tell them apart, the sprawling English countryside landscapes and grand country estates. I will admit that the artwork tends toward the romantic, emphasizing Elizabeth's charms and Darcy's expressionless brooding, Jane's loveliness and Bingley's exuberance. It reminded me of certain things found in shoujo (manga aimed at girls) and josei (manga aimed at adult women) manga: sweeping romances, emotions, relationships. On the other hand, the way certain other characters were portrayed made it hard to like them, like Mrs. Bennett would would obsess over marrying off her daughters to rich men so she would in turn be rich, waving her arms about, and the bumbling Mr. Collins, who looked more like a Who from Whoville and less like a human being.

This was so much fun to read, to see the classic tale portrayed in this way. The serious tone brought on by prejudice, wealth, societal customs and rules, status, and pride continued throughout the book, as well as the romance. As well as Elizabeth's learnings and lessons to not judge by appearance, to observe and listen, to take time before forming an opinion on someone. To look past flaws and see what kind of person is truly standing before her. I hope readers will go into this excited and optimistic.

(A note for future readers that this book reads right to left, as manga traditionally does, and to not get flustered. There is a small guide at the start of the book that will/should help with this.)

(I received an e-galley of this title to review from Udon Entertainment through NetGalley.)
Posted by Lindsay at 6:00 AM