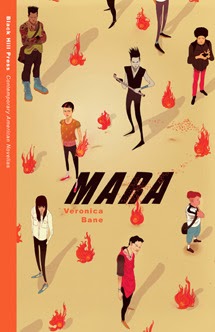 For years, Mara Tucker has used her power of manipulating flames to punish those who have done her wrong. But things are changing in the town of Jericho. Rampant disappearances have forced Mara to seek out others with special powers. In a story that confronts the violence and turmoil of adolescence, Mara and a group of other "unusuals" like her grapple with new alliances and the villains pressing in all around them.

Mara is fast-paced and dangerous, a thrilling tale of unusual teens and their unusual powers in a small town filled with deadly secrets. If they don't work together, they could end up among the disappeared.

Mara isn't the only character focused on, but she's where the story starts. A lonely girl, a powerful girl. In the beginning she runs from something, someone, and ends up in Jericho. She's used her power over fire and flames to punish those who've tried to hurt her, but is that really all there is? If she's hiding from her past, what kind of future will that lead to? But then she's not alone, then she discovers there are others like her, with powers, and others who want to stop them.

All of the teens used to be separate, usually alone with no friends, but when they discover they're more alike than they thought, they're forced to work together. There are a lot of butting heads, a fair number of arguments and fights, but they'll have to come together or they'll be ripped apart. It was entertaining to see the group come together, different personalities and motives clashing and arguing.

Jericho is a small town filled with dangerous secrets and racism. Both hit hard and both linger. The racism spewed by certain characters is so obvious, so out in the open, that I felt sick. They don't bother to hide it, not caring what anyone things. It's this fear of the other that leads to hatred and fear, and for those considered to be the other, it could lead to retaliation. Because they will fight back to have their voices heard.

A novella is a curious choice, you only have so many words in which to tell so many things. It certainly makes for a more fast-paced story. There's can't be any extra information, it needs to be clear and to the point. No hiding behind back story. But there still has to be character development, and I felt there was. It's not just Mara that has to learn to work as part of a team but all of them. They all have their fears, their wants and needs, their reasons for wanting to run when it gets deadly, but they also have those moments of change that keep them from being one-dimensional.

I found this story to be interesting and exciting. The stakes are high and the tension is high, as they often are in life or death situations. Some questions are answered but others are left open. Hopefully, they will be answered in the next installment.