Me on The Geography of You and Me 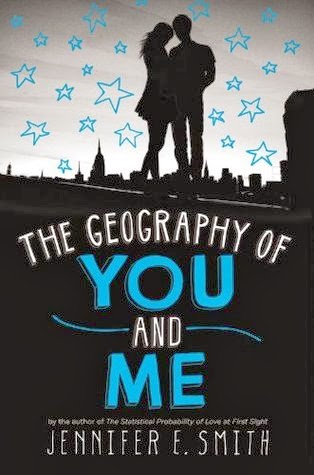 Lucy and Owen meet somewhere between the tenth and eleventh floors of a New York City apartment building, on an elevator rendered useless by a citywide blackout. After they're rescued, they spend a single night together, wandering the darkened streets and marveling at the rare appearance of stars above Manhattan. But once the power is restored, so is reality. Lucy soon moves to Edinburgh with her parents, while Owen heads out west with his father. Lucy and Owen's relationship plays out across the globe as they stay in touch through postcards, occasional e-mails, and, finally, a reunion in the city where they first met.

Lucy and Owen are different people. They have their separate lives, their likes and dislikes, their reasons for wanting to find the place that's theirs and theirs alone. But for one night they're together, first trapped in an elevator then wandering a dark NYC. Their blackout banter was great. It wasn't easy-breezy but a little strained, a little awkward and unfamiliar. But it was because they didn't know each other. It was entertaining and honest, and as quickly as it started it ended. Their separate lives return with the lights, taking hold and pulling them back. What could have been disappears, but that doesn't stop them from thinking about the other.

There's a sense of longing that fills this book that's both bitter and sweet. Wanting to be in the right place and with the right person, trying to figure out who you are and where you want to be. Journeys like that can take a lifetime. After that one night, Lucy and Owen continue their lives, but something is missing. Something they keep searching for. With different people, in different places. But it's never the same.

I found this a heart-warming journey of a book. The idea that home isn't a place but a person is one some people don't consider. That sometimes it's with a specific someone and not a location is where you're the most comfortable being you. You're able to like what you like, hate what you hate. There's a curious sense of magic afoot when you meet someone and connect with them like that. Either in an instant or over time, either romantically or not, that person becomes extremely important to you. And you'd do anything to be by their side again.