Me on Far From You 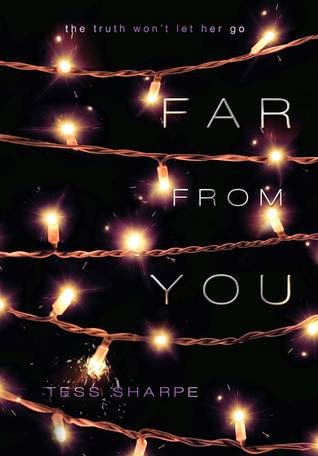 Sophie Winters nearly died. Twice. The first time, she's fourteen, and escapes a near-fatal car accident with scars, a bum leg, and an addiction to Oxy that'll take years to kick. The second time, she's seventeen, and it's no accident. Sophie and her best friend Mina are confronted by a masked man in the woods. Sophie survives, but Mina is not so lucky. When the cops deem Mina's murder a drug deal gone wrong, casting partial blame on Sophie, no one will believe the truth: Sophie has been clean for months, and it was Mina who led her into the woods that night for a meeting shrouded in mystery. After a forced stint in rehab, Sophie returns home to a chilly new reality. Mina's brother won't speak to her, her parents fear she'll relapse, old friends have become enemies, and Sophie has to learn how to live without her other half. To make matters worse, no one is looking in the right places and Sophie must search for Mina's murderer on her own. But with every step, Sophie comes closer to revealing all: about herself, about Mina and about the secret they shared.

Far From You is an emotional journey. Rough, painful, and unflinchingly honest, it's a story of searching. Searching for the truth, searching for acceptance, searching for memories. Sophie's struggle is real, so very real, and she'll be lucky if she makes it out alive.

Sophie has a fair number of problems. Some are her fault and some aren't. Some can be fixed and some can't. Some can be accepted, moved on from, and some will always be there. She's already climbed her way out of one hole, she's clean, working every day to stay clean and away from the drugs that almost ruined her life. But that won't fix everything, and it won't bring Mina back.

This book alternates a chapter at a time from the now, Sophie returning home after rehab and her investigating Mina's murder, and the then, the years before that start with the car accident that introduced her to Oxy. Because of the back and forth the reader sees two sides of Sophie, the recovering not wanting to let go of Mina but wanting to know the truth side and the in pain and a drug haze side. As the book progresses, the reader sees how Sophie changed, why she changed, and why there are secrets she still keeps.

In the fog brought on by the pills, Sophie can forget all about her pain. Everything is better there. Nothing hurts anymore. Whatever went wrong can be forgotten. But only for a little while. The drugs won't erase her pain, her scars, the lies she told, and the truth she hides. Those will always be there, drugged out or clean and sober.

On top of high school, friends, family, college plans, job plans, other thoughts about the future, teens are figuring out who they are as people, and that includes their sexuality. Bisexuality doesn't come up a lot in LGBTQ YA novels (the most recent ones I can think of are Adaptation, Inheritance, and Coda) but it should. It's important that it's talked about, that it's brought up in this book, but it's not the whole story. That's not all Sophie is. She's bisexual but she's also a drug addict, a liar, a gimp (as she calls herself), a daughter, and a friend.

There are so many layers to this book, I can only imagine how painstaking the crafting of this story was to Tess Sharpe. Sophie's voice is clear and determined. She's afraid, she's still mourning, but she won't give up. I couldn't put this book down, which means I'll certainly be reading whatever Tess Sharpe writes next.

(I received an advance copy of this title to review from Hachette Book Group Canada/Disney-Hyperion through NetGalley.)
Posted by Lindsay at 6:00 AM