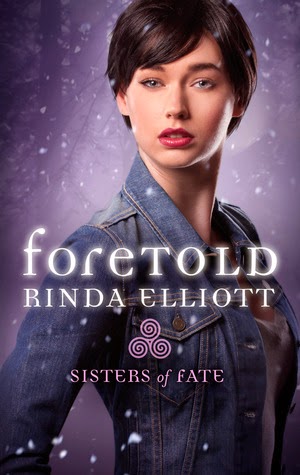 The Lockwood triplets have had a prophecy drummed into their heads since birth. Still, Raven, the eldest of the sisters, can't believe it's really happening. She's the reincarnation of a Norse goddess? One of the sisters is destined to die? When it starts snowing in summer in Florida, the sisters fear the worst has come to pass. Ragnarok, the Norse end of the world, has begun. Raven finds herself the secret protector of Vanir, a boy with two wolves, a knowledge of Norse magic and a sense of destiny he can't quite explain. He's intense, sexy and equally determined to save her when it becomes clear someone is endangering them. Raven doesn't know if getting closer to him will make a difference in the coming battle, but her heart isn't giving her a choice. Ahead of the sisters is the possibility of death at the hand of a warrior, death by snow, death by water or death by fire. Or even from something else…

Foretold is the start of what looks to be a fast-paced trilogy, filled with Norse mythology and teenage hormones, spiraling towards an explosive climax. The end of the world is coming, that much is known, but can it be stopped? Can all three sisters be saved, or must one be sacrificed?

Raven and her sisters Kat and Coral are all searching for a number of things, or people. Their mother. The possible warriors they're supposed to protect from their potentially insane mother. Raven seems to be the most practical of the three, but we only get her point of view and brief moments with her siblings. While they are all searching for something outside themselves, there's also the journey inside them that's happening. There's the norn inside of them, the ancient goddess. Is the norn something to fear or something to listen to? Will Raven accept it, or will it always be there, a sensation of power that she could lose control of?

I should've known that, from the description, there would be some insta-connection happening between Raven and Vanir. I'm not totally sold on the insta-love from her perspective, her main goal is consistent: keeping him alive and away from her mother. On the other hand, it feels like insta-love for him. He's described as touchy-feely, he keeps checking on her to make sure she's okay. His brothers provided some great comic relief at times but also a rational point of view, yelling about how it's all teen hormones and not love.

I do hope that Norse mythology will be the next mythology trend. More and more books are popping up with a heavy focus on it (books by Gratton, Livingston, and Paulson). I think Greek mythology isn't interesting anymore, the same myths are retold over and over. With Norse mythology there are different gods to explore, different mythical creatures to reveal. Mother figures and tricksters, berserkers and valkyries. I like what the author did with the mythology here, how it's woven into the present day and the lives of Raven and her sisters. How the world is really coming to an end.

I found this book exciting and fast. With the world actually ending, the stakes are the highest they could be. One wrong move and that's it. It's all over. And the Lockwood sisters are racing against the clock. Maybe it moved too fast at times, maybe Raven hit her head against something far too often to not end up with a serious concussion, maybe they rushed into making out, but I still enjoyed it. With the next two books focusing on the other sisters and their journeys, I'm curious as to how the end of the world will play out.

(I received an e-galley of this title to review from Harlequin Teen through NetGalley.)
Posted by Lindsay at 6:00 AM