Almost all the books I got this week came on Wednesday. If there's a Wednesday when I don't get books, the other people in my house (meaning, my family) think something's wrong.

Is it summer yet? Last year was crap, so it already feels more like summer than last year, but considering I live in the Pacific Northwest, summer isn't always that awe-inspiring. There's usually one really hot week where the humidity spikes a bit, then it mostly sunny and some random rain. Or there's last year when it was mostly cloudy and rainy until August for a week or two.

So, because I don't have a lot of summer releases and because I've got a lot of books to read that I haven't been in the mood to read, next week will be a bit of a hiatus. I might be around on Twitter, but there won't be any new reviews.

I hear ALA is happening soon and then ComicCon. There's been talk of maybe going to the midwinter conference in late January. Seattle's only 2 and a half hours away, it's doable. And it seems like it would be the only chance for me to go to something like ALA or BEA for the next few years (unless I find a willing proxy who's ok with picking up an ARC or two for me).

I updated the 'books/ARCs available to a good home' list and added a few titles I wouldn't mind reading. It's just a suggestion.

Next weekend is the Richelle Mead signing. It makes me wonder what I should do with my ARC. I've got published copies of the Vampire Academy books (one signed that I won) but ARCs of the Bloodlines series. So. Hmmm. Should I get the ARC signed but take my finished copy of Vampire Academy as well? Do you want my ARC? Will you trade for it? Like, for an ARC of The Raven Boys? (Or can I bribe someone going to ALA to see if they can get me an ARC of The Raven Boys? Or can I just borrow it? I'm totally okay with borrowing it. Odds are if you let me borrow it, I'll read it the day it comes then send it right back.) 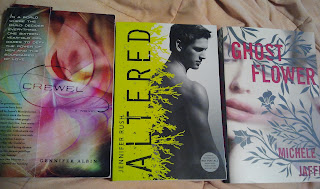 Received:
Crewel by Gennifer Albin (from Kathy who picked it up for me at BEA and got it signed, so excited about this one)
Altered by Jennifer Rush (from Hachette Book Group Canada) (my first ARC for 2013, if the release date doesn't change)
The Blood Keeper by Tessa Gratton (from Random House through NetGalley)
Meant to Be by Lauren Morrill (from Random House through NetGalley)

Email ThisBlogThis!Share to TwitterShare to FacebookShare to Pinterest
Labels: book haul, week in review, YA