Me on This is Not a Test 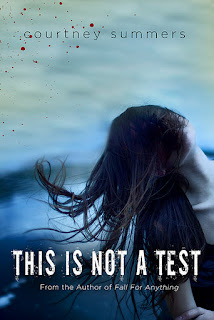 Six students have taken cover in Cortege High School, but shelter is little comfort when the dead won't stop pounding on the doors. One bite is all it takes. Then you're dead, and you come back as something monstrous. To Sloane, that doesn't sound so bad, since her world ended six months ago and she failed to find a reason to keep on going. As she waits for the barricades to fall, she's forced to witness this apocalypse through the eyes of five people who actually want to live. But as the days crawl by, the motivations for survival change in startling ways, and soon the group's fate is determined less by what's happening outside and more by the unpredictable bids for life and death inside the school. Because, when everything is gone, what do you hold onto?

This Is Not a Test is a book that sticks with you long after you finish reading it. It starts off so sad and dismal, so depressing and hopeless, but then it starts, like a gunshot, like a lightning strike, and the race starts. The race to survive.

At the beginning, being in Sloane's head is like being trapped in a fog. Everything is slow, hazy, like trying to walk through thick mud while everyone around her is moving a hundred miles an hour and the clock is ticking. It's so intriguing to see the zombie apocalypse through the eyes of a depressed and most likely suicidal teenage girl. But then you think about it, and Sloane is actually the perfect narrator for the situation: a person who doesn't want to live surrounded by both those with the desire to survive as well as the walking dead.

This book is so complex. It's all about survival, about how far we will go to survive. It's all about trust, about who you can trust, about how you trust when the world is falling apart around you. Where do you draw the line, trusting one person but not another? Who do you trust when they both want to keep on living and you don't? What if you have nothing left? What good is trusting someone when you want to give up?

The nothingness, the waiting for something to happen, for someone to come, the self-imposed semi-isolation from the outside world. It will drive you mad.

This book can be bleak and heartbreaking, waiting for something or for nothing, hoping you don't hear them on the other side of the barrier, but this book is also about what you find during the waiting, during the hopelessness. What you can find when you don't have anything left, what's hidden out where in the nothingness. It could be anything. Maybe a reason to survive, to keep fighting, to keep living. Sometimes, you can find life hidden out in the death.

(I received an e-galley of this book from Macmillan through Raincoast Books.)
Posted by Lindsay at 6:02 AM