Me on The Golden Lily 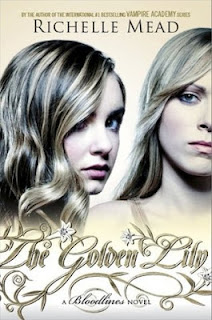 Tough, brainy Alchemist Sydney and doe-eyed vampire princess Jill are still hiding out in Palm Springs at a human boarding school. Their fellow students, spoiled children of the wealthy and powerful elite, carry on in ignorance as Sydney, Jill, Eddie, and Adrian do everything they can to keep their secret hidden. That Jill's a vampire princess hidden away to keep her alive. But with some forbidden relationships and dangerous threats, keeping a secret is harder than expected. This time around, Sydney's got even more on her plate, like questioning the motives of the Alchemists, like dealing with a possible new threat to everyone's safety, like maybe figuring out what to do when a guy asks you out.

Second in the series, The Golden Lily doesn't fail to disappoint for loyal fans of both this and the previous Vampire Academy series. Readers will be tossed straight back into Sydney's story, complete with all her issues and neuroses, her uneasiness over her Moroi friends drinking blood, her gradual acceptance that perhaps not all vampires shouldn't be trusted.

The biggest surprise in this new installment is the prospect of Sydney getting a boyfriend. Considering the fact that she's more focused on schoolwork and the job at hand, you know she'll be flustered and ever so confused when she doesn't know how to proceed with a guy that likes her.

The side characters like Jill and Eddie and all the others are so fleshed out and flawed, and such a contrast to Sydney's practicality. It's the vampire's ability to control the elements, to use magic, that's at odds with Sydney's Alchemist nature to only believe in something when she sees it.

This is what I expect from Richelle Mead: interesting and outrageously complicated characters, something insidious hiding in the shadows, conflict upon conflict upon conflict, revenge and betrayal, loyalties stretched to the breaking point, romantic entanglements and love rectangles and polygons. Fan will relish this new story, and also be left clamoring for more.