If I hadn't gotten a declined e-mail from NetGalley on Friday, I'd have gotten 1 book to review this week. And I'll totally say what book it was for, it was the short story collection The Curiosities by Maggie Stiefvater, Brenna Yovanoff, and Tessa Gratton. *sigh* Be warned, I might get punchy in this week's post.

Reviews of two debuts went up this week, Catherine Knutsson's Shadows Cast By Stars and Leigh Bardugo's Shadow and Bone, if you're interested in either of those titles. Note to authors: no more "shadow" in your book's title. I think "shadow" is 2012's most popular word in the title of a YA novel.

The lack of books in these posts comes from me not requesting, but it's the age old problem of never knowing what to request. It's a mix of guessing how far in advance to ask and if it was a title that the Canadian office was lucky enough to get copies of. I want to know what you've been requesting, people (especially those in Canada). Most of the time I ask I'm too late or they weren't sent any from the US. What month should I be looking at? August? September? October? I'd kill for an ARC of The Raven Boys or What's Left of Me or The Friday Society. (This is why I wish I was going to BEA. ALA in January is sounding rather interesting these days.)

Oh, week leading up to BEA, I hate you almost as much as the week of BEA. If I'd known months ago that my mom wanted to go to NYC, I would've suggested we go now and work in a day or two of BEA as opposed to September to see some tennis. Oh, well. :)

*sigh* I guess it's one of those weird depressive weeks or something. :)

EDIT: This post is now a bit misleading. I was out this afternoon, stopped at a bookstore, and picked up an on sale early copy of Shadows Cast By Stars. :) 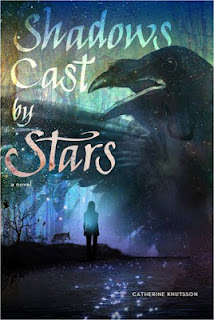 Email ThisBlogThis!Share to TwitterShare to FacebookShare to Pinterest
Labels: book haul, week in review, YA