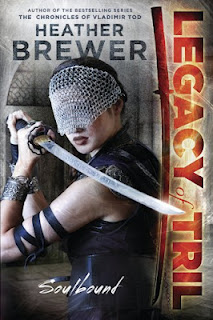 In Tril, there are Barrons who fight the war against the evil Graplar King and Healers who heal the Barrons. Kaya was born a Healer, but she wants to fight. At the Shadow Academy, it's against protocol for Healers to be trained to fight. So Kaya learns in secret, but there are barriers. Like the Barron she becomes Bound to, a guy who follows the rules, the golden boy of the Academy. Like the mysterious instructor seemingly hellbent on making Kaya's life as difficult as possible. Only one of them will agree to train her, and once that happens, the consequences could change everything.

Soulbound is action-packed and mysterious, a fantasy novel that feels like a fantasy novel in terms of world building and society but without a lot of magic. Still, the author makes up for the lack of spells and magical powers with Barrons and Healers, with connections, with being Bound and being Soulbound.

There's some interesting world building in this book. Fantasy often seems more complex than urban fantasy or contemporary in terms of world building. Sure, authors can base the setting off of actual places and events, but they still have to craft everything else from the ground up, from societal norms and rules to class structure to units of money and measurement to buildings and languages and names and terms.

There was one thing that kept be from liking this book more than I could've, and that's how the Academy that Kaya is sent to kept having this high school feel because of one character in particular, a jealous pretty girl who wants what/who she can't have. Everything else in this book was interesting, but this one girl bothered me too much. It's a little upsetting when one character has a knack of spoiling the parts of the book she's in. It's a good thing Maddox was there to provide some slightly bitter girl sass, her I liked.

There might've been less magic than I've come to expect from a fantasy, but maybe this was like a wake-up, that fantasy doesn't have to be packed with magical abilities. There's still being Bound and being Soulbound, and the differences between Barrons and Healers, as well as an intriguing setting and an ending that blew everything Kaya thought she knew straight out the window.