Me on Flirting in Italian 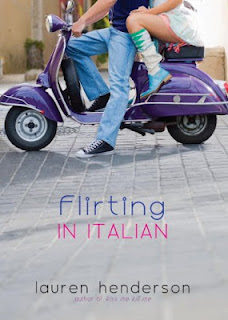 It wasn't hard for Violet to convince her mother to spend the summer in Italy: she thinks it's for university applications. But Violet's on a mission to discover the identity of a young Italian noble who's portrait was painted in the late 1700's. A girl with Violet's face. Maybe there's some kind of connection between them. Settling in at the Villa Barbiano, she meets her fellow students, two brash American girls and an English scholarship student, as well as the bitter daughter of the woman running the class and more than a few handsome Italian boys. A summer full of romance and mystery awaits Violet, and she's determined to discover the secrets of the girl in the painting, no matter what the cost.

Flirting in Italian is a fun and entertaining look at a teenage girl's summer in Italy. Violet centers the book, giving readers glimpses of her own adventures and encounters as well as those close to her. The book starts off with a rather intriguing mystery, this portrait of an unknown young woman by an unknown painter, but it seems to fade into the background by the introduction of new friends, spiteful Italian girls, and attractive Italian boys. As annoying as a character's motivation for taking action disappearing can be, there was still some mystery and intrigue, enough to keep me reading.

Her first time meeting Kendra and Paige felt a little clichéd. Not all American girls who head off to Europe are loud, obnoxious, and opinionated, but it's a popular stereotype. Besides, say you're taking a trip to Italy with a friend for two months. Who wouldn't be loud and excited?

It took a little while for me to get comfortable with this book. It's possible that's because I expected something different from this book. Before I started, I thought it would be back and forth point of views with Violet, Kelly, Paige, and Kendra and their adventures in Italy. Then I thought it would be Violet and her three new friends investigating the mystery of the painting. It turned into a book with Violet's point of view of their finishing school-esque stay in Italy with a little mystery here and there.

There's a clear difference between Violet and Kelly, Kendra and Paige, and the Italians that they meet. There's a bit of a laissez-faire sensation with the boys, rather, a bit of an over-excited sensation. They're rather loud and enthusiastic, the young men the girls meet, rather boisterous and led around by hormones. I hope it's not an overblown cliché or stereotype. There's also the more comfortable attitude with teenagers drinking alcohol, but it is Europe.

The story was fun, I was drawn in, I didn't not want to keep reading it, but there were some spots that confused me. First, the painting. I wanted some more research into the painting. Perhaps I wanted a little Nancy Drew in Italy. Second, the ending. While, in a sense, it is an ending, it's an ending that sets up for an obvious sequel or companion book and leaves a fair number of questions unanswered.

That being said, even with the issues I had, it's still a good story if you're looking for contemporary YA set in Europe in the vein of Anna and the French Kiss or The Statistical Probability of Falling in Love. Some readers might have an issue or two with the language, the narrator (and the author, for that matter) are British and there was a term or two I had to look up, but other than that, it should be smooth sailing. Also, the copious amount of attractive Italian boys that appear in this book would bring a smile to many a teenage girl's face.

(I received an e-galley to review from Random House through NetGalley.)
Posted by Lindsay at 6:00 AM