Yay, I'm back! :) I feel better than I did at the end of last week. I might not have read the whole week like I wanted to, but I do feel better.

VanCAF was really cool. It was fun meeting the artists behind the comics and webcomics I like. I only ended up going on the Saturday. I would've loved to go back for the Sunday and wander around again, but then I would've wanted to buy lots more prints and comics. *sigh* But now that I've been, I've already made the decision to go back next year. :) If you've at all interested in what I picked up at VanCAF, I posted pictures of my haul over of Tumblr.

Reviews for the coming week will feature While We Run by Karen Healey (Tuesday) and The Strange Maid by Tessa Gratton (Friday). :) 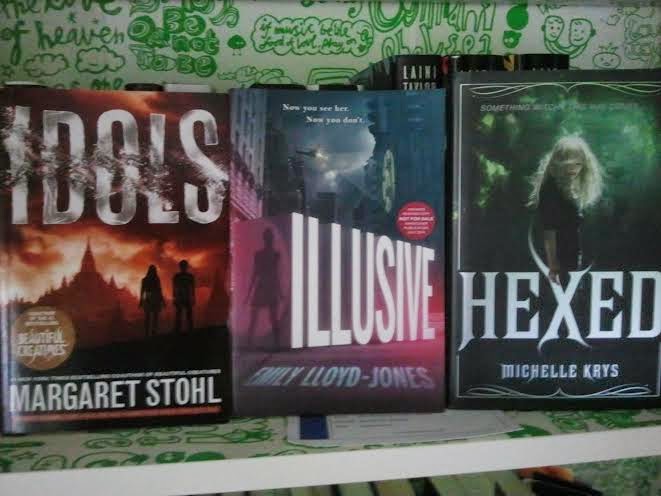 Idols by Margaret Stohl (from Hachette Book Group Canada)
Illusive by Emily Lloyd-Jones (from Hachette Book Group Canada)
Hexed by Michelle Krys (from Random House Canada)
Rain by Amanda Sun (from Harlequin through NetGalley)
Crushed by Eliza Crewe (from Strange Chemistry through NetGalley)
City of Heavenly Fire by Cassandra Clare (bought)
While We Run by Karen Healey (e-book borrowed from the library)
Royally Lost by Angie Stanton (e-book borrowed from library)
The Cabinet of Curiosities by Stefan Bachmann, Katherine Catmull, Claire Legrand, & Emma Trevayne (e-book borrowed from library)
Posted by Lindsay at 8:00 AM