Day 8. Both of today's posts are sort of doing double duty. As well as being part of this event, these posts are part of Penguin Canada's blog tour for Caroline Pignat's newest book, Unspeakable, the story of a young girl and her life after surviving the sinking of the Empress of Ireland in 1914. First, my review. 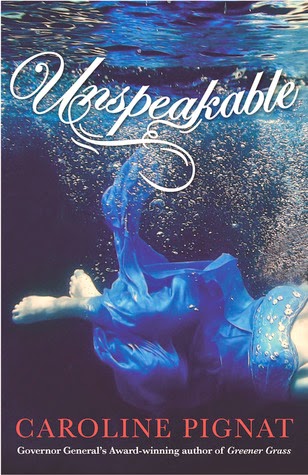 On her first voyage as a stewardess aboard the Empress of Ireland, Ellie is drawn to the solitary fire stoker who stands by the ship's rail late at night, often writing in a journal. Jim. Ellie finds it hard to think of his name now. After their wonderful time in Quebec City, that awful night happened. The screams, the bodies, the frigid waters. She tries hard to tell herself that he survived, but it's hard to believe when so many didn't. So when Wyatt Steele, journalist at The New York Times asks her for her story, Ellie refuses. But when he shows her Jim's journal, she jumps at the chance to be able to read it herself, to find some trace of the man she had fallen in love with, or perhaps a clue to what happened to him. There's only one catch: she will have to tell her story to Steele and he'll "pay" her by giving her the journal, one page at a time.

Unspeakable is haunting, mysterious, and enchanting, anchored by a tragic historical event and a young woman's search for many things. This book is about survival, about moving on and standing tall, about finding your place, writing your story, even when life is hard and the future is bleak.

Steele is relentless in his search for Ellie's story. He's as desperate as the reader, wanting to know the truth of what happened that night, how she survived, what she saw, and how she got there. Steele is like a conduit for the reader. It's only with his prodding and dealing with Ellie, their trades, that the reader discovers the truth. About the crash. About Jim. About Ellie and her mysterious past.

It's true that Jim's journal holds some secrets, revealing more pieces of a young man Ellie barely knew, but this book is all about Ellie. Her search for everything, really, and as the book goes on the story evolves, focusing more and more on what she was never ready to speak about until she was pushed in the right way.

I will admit to not knowing the story of the Empress of Ireland before reading this. Considering the story behind its last voyage, how more people died than on the Titanic, I'm surprised it's not talked about more. Perhaps because it wasn't the first sailing, or that it wasn't as grand, or any number of other reasons.

The moments in the past are often filled with heartache and sorrow but also with discovery and strength. We learn from hardship, even when we don't want to, when we're ready to give up. We learn how to pull ourselves up out of the darkness and back into the light, how to find our own paths to follow. That's what this is for Ellie. This is her chance to survive, to move on, to finally live her life. I would certainly recommend this to any historical YA fans or anyone looking for an emotional story.

(I received an advance copy of this title to review from Penguin Canada.)
Posted by Lindsay at 5:58 AM