Me on While We Run 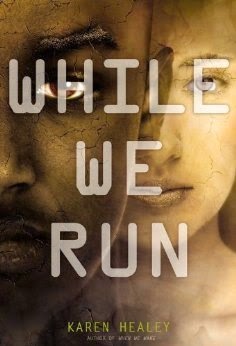 Abdi Taalib thought he was moving to Australia for a music scholarship. But after meeting the beautiful and brazen Tegan Oglietti, his world was turned upside down. Tegan's no ordinary girl. She died in 2027, only to be frozen and brought back to life in Abdi's time, 100 years later. Now, all they want is for things to return to normal (or as normal as they can be), but the government has other ideas. Especially since the two just spilled the secrets behind Australia's cryonics project to the world. On the run, Abdi and Tegan have no idea who they can trust, and when they uncover startling new details about Project Ark, they realise thousands of lives may be in their hands.

While We Run is a return to a shocking future filled with fear, hatred, despair, and secrets. The first book shocked and scared me, and this one did the same, making me wary of what may come to pass, even though hope remains, tucked away to be wished for but never voiced.

Here, the reader is led not by Tegan but by Abdi, a foreign student and singer in migrant-fearing Australia. His is a quieter voice, a thoughtful voice. In the beginning he is separated from Tegan, putting on a show for the public. The perfect puppets of a government that's crushed their hopes and ruined their exposure of the truth. At times I missed being in Tegan's head, her attitude and her 21st century way of thinking. Abdi has his moments, his strengths, his own pain and suffering, but there was a time or two when it felt like both he and Tegan were pulled along with everyone else, running, reacting instead of acting.

Like the first, there is a fair amount of fear and hatred in this book. There are still groups calling for answers, for an end to the migrants and refugees trying to enter Australia, for Tegan's death because it's not right for her to be alive. But it felt different than the first. Perhaps it's because of the point of view change, perhaps because some time has passed from the end of the first book. Perhaps it's because this is the aftermath. Now some truths are out, revealed in defiance of a controlling government, and Tegan and Abdi are suffering because of the consequences.

Both this and its predecessor are the only books to have frightened me so much. I am genuinely afraid of a future like this, where people are treated like nothing, where governments move further and further to the right, becoming more conservative, more isolationist. When visitors from other countries are feared, hated. If this is what the future could bring, I hope I'm not around to see it.

(I borrowed a copy of this title from the library.)
Posted by Lindsay at 6:00 AM