Day 10: The Opposite of Geek

Day 10. Another review. :) This is actually set in the Lower Mainland/Vancouver-ish area, so a book to check out if you're looking for more YA authored by Canadians and set in Canada. 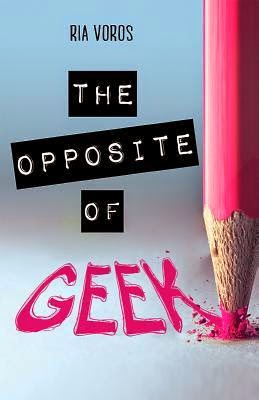 Gretchen Meyers doesn't know exactly what went wrong, but life in the eleventh grade is beginning to suck. As if having a semi-nudist, food-obsessed family wasn't awkward enough, she has lost her best friend to the fanatical school swim team, and her chemistry grade is so close to negative digits that only emergency tutoring can save it. So far, so high school. Then James/Dean rolls into her life, also known as her zit-faced chemistry tutor James and his slightly less zit-faced cousin Dean. Kind-hearted rebels without a cause, they draw Gretchen out of classroom hell, and briefly the world seems full of possibility. But everything changes over the course of one awful night. Bewildered by harsh new emotions of grief and love, Gretchen realizes she must now decide who she wants to be and what it means to be loyal.

When the book starts, Gretchen feels her life is spiraling into a big pit of nothing, brought down by her strange family, her growing distant best friend, and her failing chemistry grade. In turn she becomes angry, maybe a little depressed, and she doesn't understand why this is happening to her. She's hit that spot, the one where you start figuring out what you want to do after high school, after college, and what you want doesn't necessarily match up with that plans you had before. Or your parents' plans for you. Or what your teachers are pushing you towards.

It doesn't help Gretchen's tumble into frustration with her parents over her future that her best friend suddenly (to Gretchen) has other interests. Has new friends. Would rather hang out with them. Friends come and go, it's one of those painful parts of life that we just can't avoid. But then James and Dean enter her life, two guys rather different from anyone she knows, two weird guys who give her the chance to escape. And she needs to escape. She needs fresh air, away from the pressure. In a way, they save her.

I found the writing style of the book, the mixture of poetry and prose, to be rather lyrical and expressive. Gretchen's voice is clear, honest, filled with her disappointment, sadness, and happiness. Everything she feels is there on the page for the reader to see. Maybe there were times when Gretchen headed towards whiny and annoying, when her teen angst felt over-done and exaggerated, but then isn't everything over-done and exaggerated when you're a teenager? Doesn't it always feel like the world will end when something doesn't work out? I would recommend this to contemporary YA readers looking for a little poetry with their prose and a lot of reality.