Me on Guy in Real Life 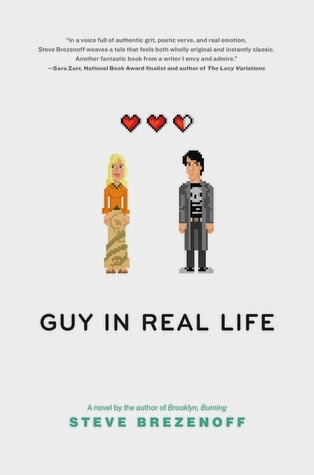 It is Labor Day weekend in St. Paul, Minnesota, and a boy and girl collide on a dark street at two thirty in the morning. Lesh, who wears black, listens to metal, and is new to MMOs; and Svetlana, who embroiders her skirts, listens to Björk and Berlioz, and dungeon masters her own RPG. They should pick themselves up, continue on their way, and never talk to each other again. But they don't. This is a story of two people who do not belong in each other's lives, who find each other at a time when they desperately need someone who doesn't belong in their lives.

Guy in Real Life is entertaining and thoughtful, filled with great characters and a fair amount of gamer culture. But hopefully that doesn't scare away any non-gamers.

In this book the reader meets Lesh, maybe a little withdrawn, but maybe that's all the black clothes and the heavy metal. The reader also meets Svetlana, vaguely hippie-ish but extremely creative and artistic and comes across as random who a lot of people don't understand. They have their similarities, mostly that their parents don't quite understand them and want them to be not who they currently are. Their collision starts something, starts this weird journey through forests and graveyards. I liked that there was so much character development, that I could see them changing in different ways, figuring things out, figuring themselves out as the book went on. I also liked the chapters narrated by Lesh's RPG character, it was an interesting glimpse into the game.

The book isn't all about gaming, not completely packed with MMO terms and 20-sided dice jokes, but it is about two characters who game, one online and one with an in-person group. It's something they're interested in, something they're passionate about. Something they look forward to after a long day of school, parents, and real life pressure. And I love that. It doesn't have to be games, it could be art or music or sports. It's the enjoyment they get out of taking part it in that makes them feel realistic.

Roleplaying is a curious thing. It gives us the chance to be someone else, to live a different life, often a life filled with magic and monsters, with quests and heroes and dragons hoarding gold in dark caves. But it's not just in games that we put on a costume and pretend to be someone else. We do it at school, at work, in the grocery store, at the mall. We do it constantly in order to portray a role in front of others. It's who we want to be, or who we think we want to be, or who others want us to be. But showing people who we really are? That's so much harder.

I think this book says a lot about identity, about the ways in which we figure out who we want to be at different times. About the little things we see in other people that make us think about who we want to be instead of who we are at that moment. I hope that people who aren't into gaming, video or tabletop, give this book a read. I found this interesting, a little more serious than I was expecting, and a great book about two teens meeting by chance and what follows. The good and the bad, the raiding and the trolls. The adventure.

(I received an advance copy of this title to review from HarperCollins Canada.)
Posted by Lindsay at 6:00 AM