Me on The Radiant Road 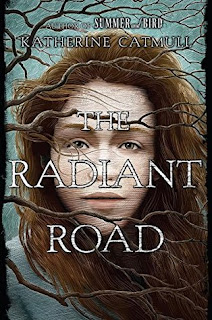 After years of living in America, Clare Macleod and her father are returning to Ireland, where they'll inhabit the house Clare was born in—a house built into a green hillside with a tree for a wall. For Clare, the house is not only full of memories of her mother, but also of a mysterious boy with raven-dark hair and dreamlike nights filled with stars and magic. Clare soon discovers that the boy is as real as the fairy-making magic, and that they're both in great danger from an ancient foe.

The Radiant Road is a magical and mysterious fairy tale rich with imagination and possibilities, of history and fireflies. Of hope and fear and purpose.

Clare is a quiet, lost girl. A lonely girl. A girl who locked away all of her memories of her mother and her mother's stories because it was too painful for her to remember. And so she stayed alone in her head, travelling with her father, writing her words in her secret notebook. Because not every child grows up with stories of making and of the Strange. Not every mother taught their daughters about faeries and magic and secrets tucked away in their commonplace books. Clare, with her stories and talk of faeries, is seen as weird and foolish by other kids, so she makes herself grow up fast. Until she and her father return to Ireland. Until she sees the boy with the black hair, until she remembers it isn't all stories and nonsense.

There is a rich world here full of faeries, if that's what you call them, magic, and creation. There is a realm of possibility living alongside Clare's human world, a realm that invites dreaming and making the impossible. A realm of wonder but also of deep, dark, dangerous secrets. With the human world growing, changing, this other world needs protection. It needs Clare and her glorious house with a tree inside of it.

Clare is caught in that space between the fantasies of childhood and the harsh realities of purpose and decision-making. Between possibility, between running through the streets barefoot and fancy-free, and hitting those teenage years when you're forced to start thinking about your future. High school, college, jobs. But in this space Clare discovers who she is, what she can do. What her true purpose is in this little hill house with the yew tree inside of it. I would recommend this to fans of magical and almost poetic storytelling, to those looking for a lost heroine who's on a hard road to find her way again.