Me on The Night Parade 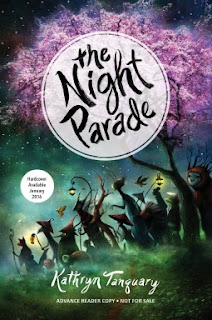 The last thing Saki Yamamoto wants to do for her summer vacation is trade in exciting Tokyo for the antiquated rituals and bad cell reception of her grandmother's village. Preparing for the Obon ceremony is boring. Then the local kids take an interest in Saki and she sees an opportunity for some fun, even if it means disrespecting her family's ancestral shrine on a malicious dare. But as Saki rings the sacred bell, the darkness shifts. A death curse has been invoked... and Saki has three nights to undo it. With the help of three spirit guides and some unexpected friends, Saki must prove her worth - or say good-bye to the world of the living forever.

The Night Parade is rich with mythology and magic, with mystery and problem-solving.

At the beginning of the book, Saki comes across as a spoiled 13-year-old girl. She's more worried about her friends in Tokyo and what fun she's missing out on than her grandmother's health, than the customs and rituals that come with the Obon ceremony. Than the shrine in the mountains behind her grandmother's house. She's hard to like because of her dismissive, apathetic attitude. She's also confusing in that she wants to be back in Toyko with her friends but acknowledges repeatedly that she's tired of them, that they're really bullies. She skated the line between annoying and normal teen girl trying to fit in with friends and not spend her school days alone and bullied.

The story itself is filled with Japanese customs, mythology, and magic. Of spirits and witches, of shrines and spirit guides and curses. It's so dense with story, with situation and situation that Saki is pulled into because of her initial mistake, because of her carelessness. But one thing bugged me. I loved how the tanuki was called a tanuki, how the tengu was called a tengu, how the Japanese names for a number of spirits and items were used, but not all of them. The kitsune was called a fox and the orge with its large club wasn't called an oni with a kanabo. The inconsistency bothered me (as this is a review of an e-galley, I wonder if this has been changed in the final copy).

I like how this book is set in Japan with, while written in English, the characters speaking Japanese. The Japanese words weren't in italics, which was surprising to see. For a book about a Japanese girl in Japan falling in with the local spirit world, the lack of italics made the book feel more authentic. But there were some inconsistencies, like with the use of fox instead of kitsune, and why Saki would refer to her parents as Mom and Dad instead of the Japanese terms. The story itself also felt rather long for a middle grade book. I would recommend this to those looking for more middle grade set outside of North America, for those looking for magic and fantasy but set in the real world, and those looking for more diverse middle grade stories.