Me on A Thousand Nights 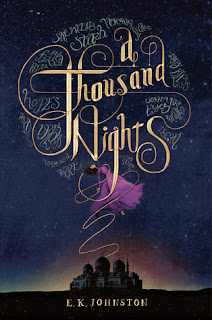 Lo-Melkhiin killed three hundred girls before he came to her village, looking for a wife. When she sees the dust cloud on the horizon, she knows he has arrived. She knows he will want the loveliest girl: her sister. She vows she will not let her be next. And so she is taken in her sister's place, and she believes death will soon follow. Lo-Melkhiin's court is a dangerous palace filled with pretty things: intricate statues with wretched eyes, exquisite threads to weave the most beautiful garments. She sees everything as if for the last time. But the first sun rises and sets, and she is not dead. Night after night, Lo-Melkhiin comes to her and listens to the stories she tells, and day after day she is awoken by the sunrise. Exploring the palace, she begins to unlock years of fear that have tormented and silenced a kingdom. Lo-Melkhiin was not always a cruel ruler. Something went wrong. Far away, in their village, her sister is mourning. Through her pain, she calls upon the desert winds, conjuring a subtle unseen magic, and something besides death stirs the air. Back at the palace, the words she speaks to Lo-Melkhiin every night are given a strange life of their own. Little things, at first: a dress from home, a vision of her sister. With each tale she spins, her power grows. Soon she dreams of bigger, more terrible magic: power enough to save a king, if she can put an end to the rule of a monster.

A Thousand Nights is mystical, lyrical, and enchanting. It's a story of sorrow and magic, of power and craft, of language and words. It's a story of love, how you can love someone so much you would do anything for them.

The narrator is complex. Kind-hearted, selfless, passionate. She will do whatever it takes to keep her sister alive, to keep her from being yet another dead wife. And so she puts herself in front of Lo-Melkhiin's gaze. And so she draws his attention. And so she rides off, not knowing how much longer she will live, believing that she will die. She doesn't realize that there's something different about her, something that keeps her alive, night after night. She doesn't sit around forever, waiting, and instead tries to learn about this new world she lives in. Tries to learn about the man who has taken her to wife. She tries to save everyone.

In some ways, this is a bit of a love story, but not in a grand epic romance sort of way. The narrator and her sister are as close as can be. Raised together, taught together. It's not often that this kind of relationship is highlighted. Sometimes characters aren't motivated by romantic feelings. Sometimes it's those close to them, those they've spent their entire lives with, that they'd do anything for. And it's not that she's in love with her sister. She's always known that one day her sister would marry, as would she. But not like this.

There is such power in words, in storytelling, in the storytellers. It's them who recount the events, who tell the tales, who choose which words to use and pass on to those who would listen. How intriguing, that the narrator uses barely any names beyond that of Lo-Melkhiin and some of his close guards. There is power in names, but also in the nameless. In those who are everywhere, who could be anyone. The narrator could be any daughter with any sister from any village in any desert. And yet she sounds like a specific daughter with a specific sister from a specific village in a specific desert. She is everyone and she is only herself. What power she has.

This book left me in awe of storytellers, how they weave words together, how they then burn inside me with the need to share them with another. This is a book for lovers of stories, for tellers and sharers, for sisters and daughters. For those who haven't yet discovered the power inside themselves, because it is there, waiting, like a copper fire.