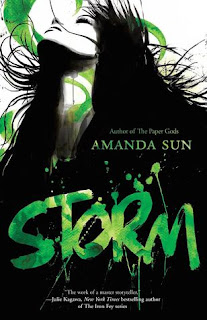 After almost a year in Japan, Katie Greene has finally unearthed the terrible secret behind her boyfriend Tomohiro's deadly ability to bring drawings to life—not only is he descended from Kami, the ancient Japanese gods, but he is the heir to a tragedy that occurred long ago, a tragedy that is about to repeat. Even as the blood of a vengeful god rages inside Tomo, Katie is determined to put his dark powers to sleep. In order to do so, she and Tomo must journey to find the three Imperial Treasures of Japan. Gifts from the goddess Amaterasu herself, these treasures could unlock all of the secrets about Tomo's volatile ancestry and quell the ink's lust for destruction. But in order to complete their quest, Tomo and Katie must confront out-of-control Kami and former friend Jun, who has begun his own quest of revenge against those he believes have wronged him. To save the world, and themselves, Katie and Tomo will be up against one of the darkest Kami creations they've ever encountered—and they may not make it out alive.

Storm is weaving its way to a conclusion, one predicted to end in betrayal, heartbreak, and death. But will it? Or will the ink take hold, refusing to let go?

Katie's determination is at an all-time high here. She's focused on finding a way to save Tomo from the battle inside him, to quiet the raging ink running through his veins. He's not the only one suffering now, Katie's dreams are becoming more intense, more dangerous and important, but Tomo's definitely in more pain than Katie. Katie's ability is diluted, she isn't under a constant barrage of voices, urges, and ink dripping from her fingers. Because she has some ability, because she can see the goddess Amaterasu in her dreams, she's able to help Tomo search. But will she be the one to save him when those in previous lives never could?

I'd said that with the second book it felt like the romance took over in some spots. Here it all clicked for me. The romance, the searching, the danger the ink presents for Tomo's sanity and survival. There are moments of real life, moments of homework and school time, of Katie hanging out with Yuki, of kendo practice, but there are more pressing matters at hand.

This book goes even deeper into Japanese mythology, into the myth of Amaterasu, the goddess of the sun, Tsukiyomi, the god of the moon, and Susano, the god of storms and the sea. Into their origin, their relationships, and their tragedies. The stories are darker than I'd imagined, filled with betrayal, jealousy, love, rage, and twisted emotions. As Katie and Tomo travel to different shrines and temples looking for the three Imperial Treasures of Japan, I was intrigued by how spiritual Japanese people are, how it's something they continue to hold close in the 21st century. Their point of view is different to my own Western/North American one that isn't as spiritual or religious. This is something that books do well, then the author has done their due diligence with research. They portray/share lives, beliefs, and points of view that differ from those of the reader.

I've said before that I've enjoyed the books in this trilogy, that this darkly magical twist to Japanese mythology is something I've grabbed hold of with both hands and devoured. As always, I do hope the author's gotten everything right. The mythology, the sights and sounds of Japan, the language and the customs. For those looking for a now complete trilogy heavy with romance, teen angst and confusion, and Japan's rich history and mythology, give this a read.

(I won a copy of this title through Goodreads First Reads.)
Posted by Lindsay at 6:00 AM