Me on This Monstrous Thing 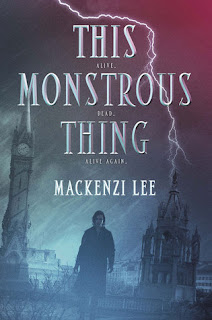 In 1818 Geneva, men built with clockwork parts live hidden away from society, cared for only by illegal mechanics called Shadow Boys. Two years ago, Shadow Boy Alasdair Finch's life shattered to bits. His brother, Oliver—dead. His sweetheart, Mary—gone. His chance to break free of Geneva—lost. Heart-broken and desperate, Alasdair does the unthinkable: he brings Oliver back from the dead. But putting back together a broken life is more difficult than mending bones and adding clockwork pieces. Oliver returns more monster than man, and Alasdair's horror further damages the already troubled relationship. Then comes the publication of Frankenstein and the city intensifies its search for Shadow Boys, aiming to discover the real life doctor and his monster. Alasdair finds refuge with his idol, the brilliant Dr. Geisler, who may offer him a way to escape the dangerous present and his guilt-ridden past, but at a horrible price only Oliver can pay…

This Monstrous Thing has the feel of a gothic novel. It's full of shadow and mystery, it's dreary and searching. It's the exploration of the impossible and the supernatural, the battle between scientific exploration and morality, and the regrets that drip from a path paved with good intentions.

Alasdair has a secret in his past. One he keeps locked away. His days are spent working with his father, making secret clockwork limbs for those who need them. Sometimes he sneaks away to visit the brother he brought back from the dead. Alasdair is torn apart, wanting his brother to be like he was before he died. Wanting to have his life back, a life where he doesn't spend his days worrying about Oliver or in fear of the police coming to arrest him and his parents. But will he be able to escape his guilt and regrets? How? They hang over him like weights ready to fall.

There's some intriguing world-building in this book. There's a practicality in the people with mechanical/clockwork limbs, a reason for them. After the Napoleonic Wars, soldiers returned home across Europe with missing limbs, some blow off or lost to disease or injury. Factories were consistently unsafe, leaving workers with serious injuries. They would need new limbs to replace the ones they lost if they still wanted to work, still wanted to move around. Still wanted to be like everyone else. Plus the inspiration from Mary Shelley's Frankenstein, the man brought back to life, the hopes and regrets of his creator. The fear in the eyes of the townsfolk. I found how the author worked this in to be rather clever.

As much as this is a book of the impossible, it's a book of regret. A book of secrets and mistakes, of lies and stories. Alasdair brought his brother back to life using gears, clockwork, and pure luck, yes, but this is about what happens after. This is the aftermath, the repercussions. This is when Alasdair has to make a difficult decision. I imagine that fans of Frankenstein retellings and Megan Shepherd's The Madman's Daughter trilogy will enjoy reading this.