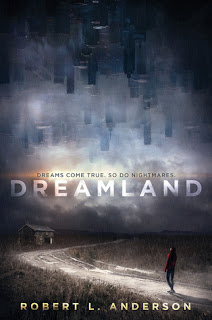 Odea Donahue has been able to travel through people's dreams since she was six years old. Her mother taught her the three rules of walking: Never interfere. Never be seen. Never walk the same person's dream more than once. Dea has never questioned her mother, not about the rules, not about the clocks or the mirrors, not about moving from place to place to be one step ahead of the unseen monsters that Dea's mother is certain are right behind them. Then a mysterious new boy, Connor, comes to town and Dea finally starts to feel normal. As Connor breaks down the walls that she's had up for so long, he gets closer to learning her secret. For the first time she wonders if that's so bad. But when Dea breaks the rules, the boundary between worlds begins to deteriorate. How can she know what's real and what's not?

Dreamland is mysterious and dangerous, a story of rules and secrets, of hidden monsters, of ticking clocks and broken mirrors. Of the truth behind dreams.

Dea is an outsider, constantly on the move with her mother. Few of her peers treat her with respect, the rest falling back on stereotypical name-calling, nasty rumours told behind her back, or keeping their distance from her. Acting like she doesn't matter. But she does. Dea is tired of moving around so much, tired of not knowing the truth. Dea wants a normal teenage life, even though she has to walk in people's dreams in order to keep living. When Connor moves to town, when his bright and friendly personality draw her in, Dea feels normal. Finally. She feels like a real teenage girl with a crush. But there are still rules to the dream walking. And Connor's appeal to Dea is the breaking point. After that, after someone goes missing, what will Dea do next? How far will she have to run?

The dream walking is some intriguing world-building. The different ways they shift and move around Dea as she walks. The ways they let her in or attempt to keep her out. In this book it's not all about the dreams having meaning, dreams holding the secrets to our hopes and fears. There is some of that, Dea can't escape that with Connor, but there's a bigger picture to find in dreams. What if there was a world beyond dreams? What if Dea and her mother weren't the only walkers?

There are a number of layers here, a number of mysteries and secrets combined to make up the book as a whole. The secret past of Dea and her mother. The secrets of Connor. The broken mirrors. The monsters in the nightmares. The dream world. I can see where some might find it a bit clunky or confusing with so much going on, the book is part mystery/thriller part paranormal/magical realism, but stick with it. I found it interesting, I wanted to know what would happen to Dea, where she would go, what the secrets of the dream world were. It vaguely reminds me of Magonia, how there's an ending but it could very well continue into another book. For fans of paranormal mysteries with a twist.