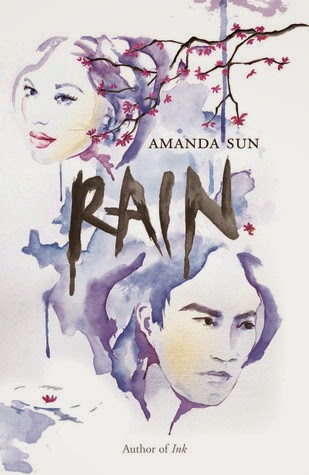 Katie has decided to stay in Japan. She's started to build a life in the city of Shizuoka, and she can't imagine leaving behind her friends, her aunt and especially Tomohiro, the guy she's fallen in love with. But her return is not as simple as she thought. She's flunking out of Japanese school and committing cultural faux pas wherever she goes. Tomohiro is also struggling. As a Kami, his connection to the ancient gods of Japan and his power to bring drawings to life have begun to spiral out of control. When Tomo decides to stop drawing, the ink finds other ways to seep into his life: blackouts, threatening messages and the appearance of unexplained sketches. Unsure how to help Tomo, Katie turns to an unexpected source for help: Jun, her former friend and a Kami with an agenda of his own. But is Jun really the ally he claims to be? In order to save themselves, Katie and Tomohiro must unravel the truth about Tomo's dark ancestry, as well as Katie's, and confront one of the darkest gods in Japanese legend.

Rain is certainly darker than the first book in the trilogy and perhaps even more dangerous. If the first book was all about discovery, this one leans more toward revelation, answers to complicated questions, and an introduction to a new and deadly problem.

Katie is still in Japan, still hopelessly in love with Tomohiro, still awkward in terms of social cues and customs, and still taking control in finding out what's wrong. She seems to take the reins in terms of discovering the truth behind her connection to the ink threatening to take over both of their lives. She's trying, she's not that passive about the situation, but the trying and searching make her seem reckless. She doesn't want to lose someone she cares about, not after losing her mother so suddenly, and so she'll do whatever it takes to keep Tomohiro sane and in control of the ink he can command. Even if that makes her a target.

Katie staying in Japan means she's still immersed in Japanese culture, customs, food, language. It means more opportunities for her to make mistakes, for her Western culture upbringing to shine through and make her look like she's just fumbling around. She's still struggling with the real life aspect of living in Japan, like learning kanji and knowing when to address someone by their last name instead of their first. It's a different culture than what she's used to, less noise and more silent opinions and judgments. A lot of people seem to keep their thoughts to themselves, but Katie can't complain because she does that, too. She doesn't tell everyone the truth about everything, she doesn't tell Tomohiro everything because she's afraid it'll make everything worse. She's still trying to find her middle ground, still trying to find her place, and it's not going well.

The romance is still present, and maybe it does take over, the two of them do get rather involved with each other, but I wasn't surprised. I knew the romance would take over, would wind itself around the mythology as the book went on. Katie and Tomohiro have hit a bit of a rocky road, though, with him thinking he can protect her from the ink if he stays away from her, but it's not that simple. It'll never be that simple.

I like how this book goes deeper into the mythology introduced in the first book, deeper into the Kami and their origins in Japan's distant past. This feels very much like a learning and growing kind of second book. Questions are answered here, about the Kami, about Katie and Tomohiro's connection. Not every question was answered, of course, but hopefully the rest of the secrets will be uncovered in the last book.

(I received an advance copy of this title to review from Harlequin though NetGalley.)
Posted by Lindsay at 5:00 AM