Me on One Man Guy 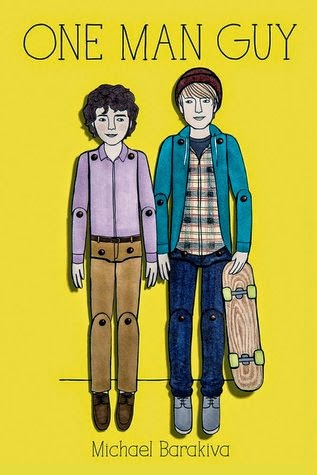 Alek Khederian should have guessed something was wrong when his parents took him to a restaurant. Everyone knows that Armenians never eat out. Between bouts of interrogating the waitress and criticizing the menu, Alek's parents announce that he'll be attending summer school in order to bring up his grades. Alek is sure this experience will be the perfect hellish end to his hellish freshman year of high school. He never could've predicted that he'd meet someone like Ethan. Ethan is everything Alek wishes he were: confident, free-spirited, and irreverent. He can't believe a guy this cool wants to be his friend. And before long, it seems like Ethan wants to be more than friends. Alek has never thought about having a boyfriend, he's barely ever had a girlfriend, but maybe it's time to think again.

One Man Guy is light-hearted, humourous, and fun. The summer starts with Alek predicting boredom and disaster, but it slowly becomes anything but, an adventure into both the city and himself.

Alek seems to have reached the stage where he's trying to figure out who he is, and it pushes against the boundaries of how his traditional Armenian parents have raised him and his older brother. It's not that he hates them or his life, he wants to know what else the world has to offer a fourteen-year-old guy. All the excitement that other teenagers get to experience. Like taking the train into New York City, or shopping somewhere more interesting than the Gap.

I found the relationship between Alek and his parents to be rather interesting. They're traditional, steeped in Armenian culture, and Alek sort of straddles the line between them and 21st century America. It's a bit like the past and present coming together. But not in a hateful or spiteful way, I never got that feeling while reading. There wasn't any cruelty, any disdain. A lot of this book is about understanding, about family and love, and I thought this was a great glimpse into Alek's life, into a culture I rarely see represented in books, TV shows, and movies.

I can see this as a coming of age story, but not necessarily as a coming out story. It's all one story, it's all Alek feeling out of place at the beginning and slowly chipping away at the space he's been given so he fits into it better. It all worked together in a way I don't often see in LGBTQ YA. Alek and Ethan just felt right, it wasn't a grand production, it wasn't surrounded by hatred or fear, it was two teenagers maybe sort of falling in love the way teenagers do.

So much of this book is about family and understanding, about acceptance and love. Alek is pressured by his parents to advance at school, to be the best, but as serious as they are they're also supportive. This was a refreshing and fun read, and if it hadn't ended I would've hoped for more.