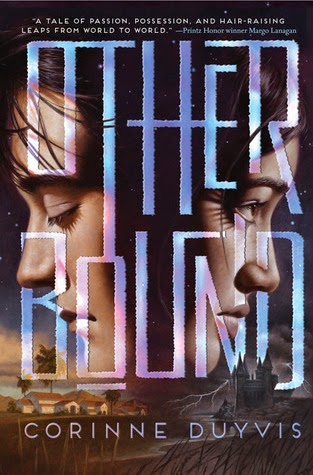 Amara is never alone. Not when she's protecting the cursed princess she unwillingly serves. Not when they're fleeing across dunes and islands and seas to stay alive. Not when she's punished, ordered around, or neglected. She can't be alone, because a boy from another world experiences all that alongside her, looking through her eyes. Nolan longs for a life uninterrupted. Every time he blinks, he's yanked from his Arizona town into Amara's mind, a world away, which makes even simple things like hobbies and homework impossible. He's spent years as a powerless observer of Amara's life. Amara has no idea... until he learns to control her, and they communicate for the first time. Amara is terrified. Then, she's furious. All Amara and Nolan want is to be free of each other. But Nolan's breakthrough has dangerous consequences. Now, they'll have to work together to survive-and discover the truth about their connection.

Otherbound is unique, imaginative, and mysterious. It's a compelling and wonderfully written story of two teens from different worlds somehow bound together and forced to work together, or both of their worlds will be ruined. Complex, realistic characters and intriguing worlds are what make this book, they're what anchors the reader in the story, taking them along for an action-filled adventure.

Nolan would give anything for a normal life, for not seeing Amara's world every time he blinks, sleeps, closes his eyes to sneeze. He doesn't sound defeated, but she does sound weary, tired. It takes up his entire life and barely leaves room for anything else. Maybe family, maybe school, certainly not friends. It's all he knows. He's never had the chance to be a normal American teenage boy. Amara also knows one life. Being a mute servant, protecting Cilla, keeping her head down and obeying the rules of her meager station, it's all she knows. It's never been about what she wants. As a servant, she has little control, and when Nolan appears with the ability to control her body? She turns to fear and anger. Her body has always been hers, if not her life, and to suddenly discover someone else can control it, can see through her eyes, is extremely frightening. The two are different, very different. They cause each other pain in different ways. But, as painful as it is, they only way to discover the cause of their connection is to work together.

It's no secret that I love well-crafted world-building. Two worlds were created for this story, one very familiar and one not so much, but both separate in their customs and culture. Both with varying levels of magic and fear. Both Nolan and Amara have to work to navigate their worlds, Nolan even more considering he's in both. Of course, his experience in the Dunelands is complicated as he's there not in his body with his abilities and disabilities but in hers with her different abilities and disabilities. That adds another layer of complexity to this story, navigating a different world than your own in a different form.

I don't think I've read a book where both the main characters were people with disabilities, with one being unable to speak and the other having lost a foot/part of their leg. Both react so honestly and realistically to the world around them, Nolan and his stumbling around on one leg while he's feeling sick, Amara's way of speaking through signing with her hands. They were never glossed over, but also never focused on to the point of overwhelming. They're part of who they are as characters but they don't define them. They're still people, still human, and they're not written as less than human (there are times, I think, where Amara is treated as less than human, but that's because of her servant status and not her inability to talk).

There are so many different layers to this story. Nolan's view into Amara's world, Nolan's at-home life, Amara's servant role, Amara and Cilla's relationship, Amara's purpose, Cilla's purpose, Nolan's ability in Amara. And so many emotions are expressed. Moments of happiness, fear, anger, confusion, sadness, compassion, love, rage. Along with all the magic in this book are characters with real problems, real emotions. Lives are at stake, and the pressure that comes with that knowledge is overwhelming.

There's much much diversity in this book. Race, gender, body shape, ability/disability, sexuality, culture. It fills the pages. It leaves me wondering when I last read a book with so many different characters, events, places, problems, emotions. I want more books like this, more perfectly imperfect characters and their human emotions running wild as they jump from one world to another trying to survive.

(I received an advance copy of this title to review from Canadian Manda Group.)
Posted by Lindsay at 6:00 AM