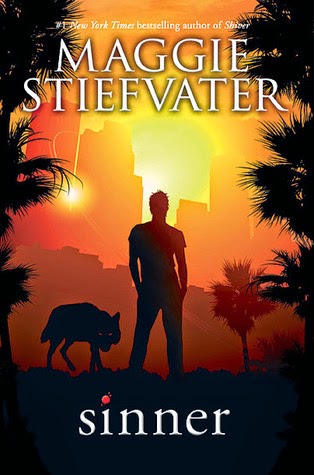 Cole St. Clair has come to California for one reason: to get Isabel Culpeper back. She fled from his damaged, drained life, and damaged and drained it even more. He doesn't just want her. He needs her. Isobel is trying to build herself a life in Los Angeles. It's not really working. She can play the game as well as all the other fakes... but what's the point? What is there to win? Cole and Isabel share a past that never seemed to have a future. They have the power to save each other and the power to tear each other apart. The only thing for certain is they cannot let go.

Sinner is enthralling and mesmerizing, a powerful punch right into the heart of everything. It's two people trying to find something, trying to find everything. They cannot live without each other, but they can't let the other in for fear of being broken.

In the beginning I saw Cole as all slick and sly and smooth and all kinds of other words that start with 'S', but he isn't. He's all of those things and he's none of them. The world sees him as talented but broken, an addict, a joker, a car accident waiting to happen. But is he truly any of those things? What I am sure of is that he's complicated beyond all understanding of the word. What I am sure of that he's human, and that he's a werewolf. And that he's completely and utterly head-over-heels in love with Isabel.

In the beginning I saw Isabel as a doll, her expressionless and carefully sculpted face covered in barely there hairline cracks. No one else can see them but her. No one is allowed to see them, she won't let anyone near her, near her heart, fractured and tucked away deep inside her hollow body. She's one blow away from breaking, shattering, falling to the ground in a shower of glass and screams and tears, and that blow will only ever come from Cole.

The ways in which we wreck and ruin ourselves and put ourselves back together are all in this book. As are the people we need in our lived who make us feel whole and the people who break us and leave us lying in the street with the proverbial bullet to the heart, because they are often the same person.

Who we are, who we were, who we want to be, who the world sees, who the world wants us to be. Never will they be the same thing, the same person. As Cole says to Isabel, "'Looks and is aren't the same. Otherwise they'd be the same word.'" (Chapter 32, will update with page number as soon as possible.)

Reading this, it felt like I was sitting at the edge of my chair watching a movie and waiting not-so-patiently for the explosion at the end. My heart would race, my breathing would speed up, my eyes would grow wide in an attempt to soak up every single word on every single page. I would be hard-pressed to think of a book more honest and more powerful than this.