Me on The Winnowing 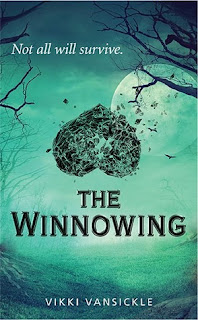 Marivic Stone lives in a small world, and that's fine with her. Home is with her beloved grandfather in a small town that just happens to be famous for a medical discovery that saved humankind — though not without significant repercussions. Marivic loves her best friend, Saren, and the two of them promise to stick together, through thick and thin, and especially through the uncertain winnowing procedure, a now inevitable — but dangerous — part of adolescence. But when tragedy separates the two friends, Marivic is thrust into a world of conspiracy, rebellion and revolution. For the first time in her life, Marivic is forced to think and act big. If she is going to right a decade of wrongs, she will need to trust her own frightening new abilities, even when it means turning her back on everything, and everyone, she's known and loved.

The Winnowing is mysterious, full of whimsy, worry, and hard truths. Marivic lives in a curious town, a rather important town. But secrets are everywhere in such an important town, secrets that could change how Marivic sees the world around her.

Marivic is smart and kind, and perhaps a little lonely after her grandmother passed away a year earlier, but she still has her grandfather. And her best friend Saren. But then Marivic hits that age, when bodies change and kids get their ACES, the bizarre night terrors that happen because of a medical marvel that saved everyone some decades before. Marivic knows then that she won't be a kid anymore, that she'll go through the winnowing in order to keep her from hurting herself, from losing her mind. But when Marivic arrives at the Barton Center, things don't feel quite right. Some odd questions are asked of her, some strange people start talking to her. Her dreams are getting stranger. And soon she's on the run, soon she's learning the truth.

This book is part sweetness, part growing up, and part eerie all-encompassing mystery. It's a gentle, well-written combination of a young girl coming of age, reaching puberty, and the strange world of conspiracy, experiments, and big secrets she enters. The truth has to come out, the others have to be saved. But Marivic isn't sure if she's strong enough to do it. What she is sure of, though, is that she'll do what it takes to keep her grandfather and best friend Saren safe. I would definitely recommend this to middle grade readers, especially to those not quite ready to move up to YA, especially to readers looking for a combination of genres in their stories.

(I received a copy of this title to review from Scholastic Canada.)
Posted by Lindsay at 3:58 AM