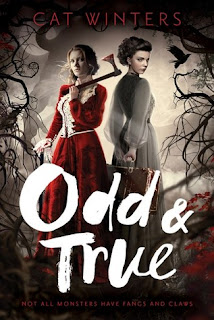 Trudchen grew up hearing Odette's stories of their monster-slaying mother and a magician's curse. But now that Tru's older, she's starting to wonder if her older sister's tales were just comforting lies, especially because there's nothing fantastic about her own life—permanently disabled and in constant pain from childhood polio. In 1909, after a two-year absence, Od reappears with a suitcase supposedly full of weapons and a promise to rescue Tru from the monsters on their way to attack her. But it's Od who seems haunted by something. And when the sisters' search for their mother leads them to a face-off with the Leeds Devil, a nightmarish beast that's wreaking havoc in the Mid-Atlantic states, Tru discovers the peculiar possibility that she and her sister—despite their dark pasts and ordinary appearances—might, indeed, have magic after all.

Odd & True is a mysterious journey. It's a story told in two parts by two voices, a story about family, about journeys, about truths and lies and secrets. About monsters, those fantastical and those hidden in our own past.

Trudchen is a little lonely, a little lost. Left behind by her father, mother, and later her sister, she's had to become practical. After the polio that almost took her leg, she's had a hard life. Struggling to get around, struggling to be seen as anything other than crippled. But now Odette's returned, ready and eager to whisk Tru off on a dangerous mission, to continue keeping people safe from monsters and demons. But it's hard for Tru to trust her sister, now that she's older and finds it hard to still believe in such stories. Od's voice is like a voice from the past, a voice who has seen, has suffered, and now knows what to do. She's the keeper of secrets and truths, the holder of knowledge, and at times it seems odd that there's only so much she'll share with her sister.

This is a curious tale, one I expected to be full of monsters and rescues, demons and creatures that lurk in the shadows, and two sisters continuing a family tradition. In some ways, that's what it is, and in some ways it isn't. It seems to be about people, their memories and their secrets, their lives and their journeys. It's about the things we hide and run from, the things we run towards, and the things we do in order to save others. I imagine fans of the author's previous books, historical tales with a dash of the ghostly and the impossible, will enjoy this, as might fans of historical stories and complicated but well-meaning sister relationships.

(I received an e-galley of this title to review from Abrams Books through NetGalley.)
Posted by Lindsay at 4:00 AM