Me on The Tiger's Daughter 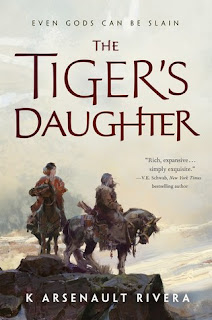 The Hokkaran empire has conquered every land within their bold reach―but failed to notice a lurking darkness festering within the people. Now, their border walls begin to crumble, and villages fall to demons swarming out of the forests. Away on the silver steppes, the remaining tribes of nomadic Qorin retreat and protect their own, having bartered a treaty with the empire, exchanging inheritance through the dynasties. It is up to two young warriors, raised together across borders since their prophesied birth, to save the world from the encroaching demons. This is the story of an infamous Qorin warrior, Barsalayaa Shefali, a spoiled divine warrior empress, O-Shizuka, and a power that can reach through time and space to save a land from a truly insidious evil.

The Tiger's Daughter is epic and expansive, the beginning of a tale of two women tied together through birth and fate. A tale of gods and demons, of purpose and status. Of defiance.

O-Shizuka is royalty, destined to be Empress of the Hokkaran empire. She resents being kept in a cage, would rather rule and live how she desires. Away from sycophants and her uncle. Shefali is one of the Qorin, a tribe of nomads, living off on the steppes with their horses and their families, slightly lost in being a quiet girl with a Qorin mother and a Hokkaran father. Together, the two girls are bound together through birth and circumstance and destiny. But first, they were two young girls falling into trouble.

This will be a short review, mostly because I've found myself conflicted. Before reading this, I expected something full of magic and demons. A tale of the epic journey of O-Shizuka and Barsalayaa Shefali, the battles they fought and how they became star-crossed lovers. What this is is more of the start of who they are, who they would become, and what happens when forces around them would try and pull them apart. It's told through letters reminiscing on their childhood and young womanhood, letters from one to the other. For my own reading tastes, from what I thought this book would be, I found it intriguing but so long. So detailed. It's too long for my taste. There was so much lead up to their actual journey, their actual confrontations with demons, and even then it didn't unfold how I thought it would. Unfortunately, this wasn't the book for me. I would recommend this to those who do enjoy long, detailed, layered with complication epic fantasy.

(I received an e-galley of this title to review from Tor through NetGalley.)
Posted by Lindsay at 4:00 AM