Me on That Inevitable Victorian Thing 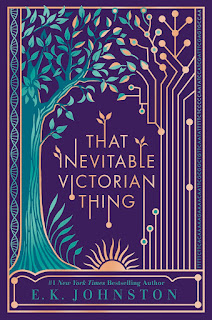 Victoria-Margaret is the crown princess of the empire, a direct descendant of Victoria I, the queen who changed the course of history two centuries earlier. The imperial practice of genetically arranged matchmaking will soon guide Margaret into a politically advantageous marriage like her mother before her, but before she does her duty, she'll have one summer incognito in a far corner of empire. In Toronto, she meets Helena Marcus, daughter of one of the empire's greatest placement geneticists, and August Callaghan, the heir apparent to a powerful shipping firm currently besieged by American pirates. In a summer of high-society debutante balls, politically charged tea parties, and romantic country dances, Margaret, Helena, and August discover they share an unusual bond and maybe a one in a million chance to have what they want and to change the world in the process —just like the first Queen Victoria.

That Inevitable Victorian Thing is charming and intelligent, hopeful and kind, and oh so witty. It's an adjustment of the past and a look towards the future for three young people full of worry and expectations.

Victoria-Margaret is a crown princess. One day she will be queen of the empire. But until then, she's Margaret, a young British woman spending the summer in Canada before heading back home. Home where expectations, like finding a future spouse, await. She's kind, intelligent, and wondering if there's anything that could be hers in the future. Helena is quiet and thoughtful, a young woman who doesn't expect anything too grand in her life. She's happy enough to live quietly with her parents, and one day with her husband, who might very well be family friend August Callaghan. But is she sure? Is that really what she wants? Especially when she discovers something rather important and life-changing about herself. August is sure of his future, he knows he will spend it with the family's shipping firm. Even though their ships are being cornered by pirates. Even though he might've screwed up here and there trying to fix it all. Even though he's stubborn as a mule. He'll still have Helena by his side. Right?

Like most E.K. Johnston books, the world-building is exquisite and extensive. I so adore the premise of this book, where it started in history and took a turn. This is like if the wrongs of history were known and were righted sooner than they have been. If racial diversity had been embraced by Queen Victoria in terms of who her children and grandchildren should marry, and by extension the rest of the British Empire, instead of continuing the tradition of marrying into white European royal houses. But like all E.K. Johnston books, the characters are just as wonderful. Full of sense and practicality and curiosity. These three young people have their whole lives ahead of them, but who knows, when all is said and done, what the future will bring. Or what they will turn the future into.

As I read this book, I wondered if I'd ever be able to articulate my thoughts and feelings on it. In the end, all I have is how I felt while and after reading. This bizarre, charming creature made up of Victorian Era tones and moods, wonderfully funny Canadian references, the religion of genetics, and honest compassion. The heartfelt, hopeful attempt at making history better than it is. The wide range of diversity it holds, from race to sexuality to ability. This book is impossible to describe. It's full of wondrous charm and sense, of practicality and honesty. It doesn't talk down to the reader, no matter their age. I would definitely recommend this to readers looking for hope and sense in the world, to those looking for something completely different.

(I received an advance copy of this title to review from Penguin Canada.)
Posted by Lindsay at 4:00 AM