Me on When I Cast Your Shadow 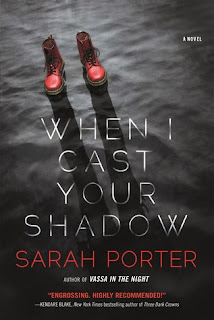 After her troubled older brother, Dashiell, dies of an overdose, sixteen-year-old Ruby is overcome by grief and longing. What she doesn't know is that Dashiell's ghost is using her nightly dreams of him as a way to possess her body and to persuade her twin brother, Everett, to submit to possession as well. Dashiell tells Everett that he's returned from the Land of the Dead to tie up loose ends, but he's actually on the run from forces crueler and more powerful than anything the Bohnacker twins have ever imagined....

When I Cast Your Shadow is dark and deadly. The story of a siblings overwhelmed by their older brother's death, and the possibility that, perhaps, he's not as dead as they thought. It's a twisted and eerie tale, but it missed the mark with me

Ruby is lost and alone, constantly mourning the loss of her older brother Dashiell. Sure, he used to be an addict, but he was clean. It wasn't his time to die. It wasn't fair. And now her days are spent wishing he was alive again while her nights are more like nightmares. Until she dreams of Dash one night, of his cajoling and his promise that they could be together again. Everett, Ruby's twin, is also mourning their brother, but when Ruby starts acting strangely, he wonders if something's up. If something's wrong. If Dash is somehow still around.

If I can be honest here, I'm not so sure that I enjoyed this book. It's dark and eerie, it hints at the supernatural, at a brief grey area that lies between life and death, but it was more that I didn't like certain characters. Which is possibly the point. Dashiell is hard to like, perhaps impossible. An addict, a liar and a thief, a manipulator. What is there to like? Ruby refuses to hear anything negative about her dead brother, focusing more on the times when Dash was kind and loving, when he bought her her prized red boots. I wonder if that was done on purpose by the author, to introduce such unlikable and willfully blind characters because not everyone is perfect. That sometimes good people get trapped by bad people, overwhelmed and manipulated, and struggle to keep their heads above water when they're around them. I can see how some might enjoy this, those who like stories that border on horror and the psychological like Simon Holt's The Devouring, but it just didn't work out with me.