Me on Royal Bastards 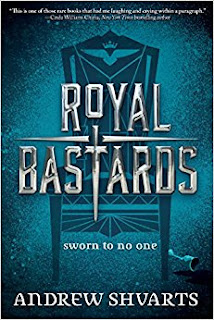 Being a bastard blows. Tilla would know. Her father, Lord Kent of the Western Province, loved her as a child, but cast her aside as soon as he had trueborn children. At sixteen, Tilla spends her days exploring long-forgotten tunnels beneath the castle with her stablehand half brother, Jax, and her nights drinking with the servants, passing out on Jax's floor while her castle bedroom collects dust. Tilla secretly longs to sit by her father's side, resplendent in a sparkling gown, enjoying feasts with the rest of the family. Instead, she sits with the other bastards, like Miles of House Hampstedt, an awkward scholar who's been in love with Tilla since they were children. Then, at a feast honoring the visiting princess Lyriana, the royal shocks everyone by choosing to sit at the Bastards' Table. Before she knows it, Tilla is leading the sheltered princess on a late-night escapade. Along with Jax, Miles, and fellow bastard Zell, a Zitochi warrior from the north, they stumble upon a crime they were never meant to witness. Rebellion is brewing in the west, and a brutal coup leaves Lyriana's uncle, the Royal Archmagus, dead—with Lyriana next on the list. The group flees for their lives, relentlessly pursued by murderous mercenaries; their own parents have put a price on their heads to prevent the king and his powerful Royal Mages from discovering their treachery. The bastards band together, realizing they alone have the power to prevent a civil war that will tear their kingdom apart—if they can warn the king in time. And if they can survive the journey

Royal Bastards is a curious sort of fantasy tale, a tale of family and rebellion, of danger.

Tilla wants. She wants to be acknowledged by her father, wants to be someone. Wants to matter. Instead, she's left labelled a bastard, left to watch her father from across a room, hoping for the day when he'll tell her that she matters to him. But instead she's on the run, racing away from danger and hopefully towards help when she and her fellow bastards witness the start of a rebellion. She's left wondering what side is the right side to be on, wondering how all of them can stay safe and not get killed.

This book had its moments, its interesting characters. The combination of the medieval fantasy setting and the modern day speech and colloquialisms was jarring at times. I do think that the book nudges towards something with Tilla and the others as they travel, as they run. That family isn't made by blood, it isn't only defined by who your parents were. Family is people you trust, people you keep close. People you would do anything for and who would do anything for you. It didn't necessarily always work for me, but I'm sure readers looking for something a little different in terms of fantasy will enjoy this.

(I received an e-galley of this title to review from Disney Book Group through NetGalley.)
Posted by Lindsay at 4:00 AM