Me on Our Dark Duet 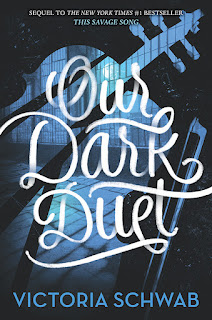 Kate Harker is a girl who isn't afraid of the dark. She's a girl who hunts monsters. And she's good at it. August Flynn is a monster who can never be human, no matter how much he once yearned for it. He's a monster with a part to play. And he will play it, no matter the cost. Nearly six months after Kate and August were first thrown together, the war between the monsters and the humans is terrifying reality. In Verity, August has become the leader he never wished to be, and in Prosperity, Kate has become the ruthless hunter she knew she could be. When a new monster emerges from the shadows—one who feeds on chaos and brings out its victim's inner demons—it lures Kate home, where she finds more than she bargained for. She'll face a monster she thought she killed, a boy she thought she knew, and a demon all her own.

Our Dark Duet is a book of music and sorrow, of shadows and monsters. Of the monsters we fight and the monsters that live inside ourselves. Of the parts of ourselves that we can't turn away from, no matter how hard we try. Of the cost of living and the desire to keep from dying.

After leaving Verity, Kate's on the hunt in Prosperity, taking down the monsters that have popped up there. Stalking the shadows, attempting to keep a clueless city safe. Until something new makes its way out of the shadows. Something far more dangerous than the Malachai, the Corsai, or the Sunai. A new kind of monster that feeds and infects, over and over. When it heads to Verity, Kate knows she has to return to what she left behind, the monsters and the dead. August.

August has become what he hated, what he never wanted to be. A soldier in the FTF. A leader. A monster, using his music night after night. He's at war with himself, the part that's always been Sunai, always been a monster, warring against the years he spent watching humans, imitating humans. Wanting to be human. When something new arrives in Verity, with Kate Harker on its heels, August is worried, furious, and afraid. Afraid of what's coming, afraid of who he may lose in order to save the city.

This book is fast-paced and poetic, highlighting the struggles between the monsters that lurk in Verity's shadows and the human task force struggling to stay alive. The struggles inside both Kate and August, their humanity clashing with their fate. This book is heart-breaking and dangerous, coated in blood and tears, in fragile hearts filled with indestructible emotions. It's so much a Victoria Schwab book and I was pleased to feel emotionally drained as I read this.