Me on The Gentleman's Guide to Vice and Virtue 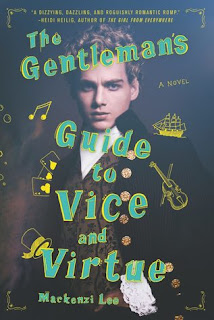 Henry "Monty" Montague was born and bred to be a gentleman, but he was never one to be tamed. The finest boarding schools in England and the constant disapproval of his father haven't been able to curb any of his roguish passions—not for gambling halls, late nights spent with a bottle of spirits, or waking up in the arms of women or men. But as Monty embarks on his grand tour of Europe, his quest for a life filled with pleasure and vice is in danger of coming to an end. Not only does his father expect him to take over the family's estate upon his return, but Monty is also nursing an impossible crush on his best friend and traveling companion, Percy. Still it isn't in Monty's nature to give up. Even with his younger sister, Felicity, in tow, he vows to make this yearlong escapade one last hedonistic hurrah and flirt with Percy from Paris to Rome. But when one of Monty's reckless decisions turns their trip abroad into a harrowing manhunt that spans across Europe, it calls into question everything he knows, including his relationship with the boy he adores.

The Gentleman's Guide to Vice and Virtue is a tense journey through France and Spain, a journey of self-discovery and pain. A journey of fear and truth.

Monty is a rake of the first order. A scoundrel and a flirt and a drunk. The only thing he has that he actually cares about, that his world somewhat centers on, is his best friend Percy. He needs their friendship and their closeness. Having Percy at his side is the only reason why Monty puts up with what he hates. Family. Expectations. The future. Monty can't help who he is, what he does, that he's attracted to boys as well as girls, and so he's looking forward to this Grand Tour with Percy. A whole year away from his father and from expectation.

I wasn't quite sure how I felt about this book, about the journey that the three of them end up on. It was hard to like Monty, to sympathize with him. His refusal to take much of anything beyond his own happiness, and Percy, seriously is a blemish on his character. It takes time to learn more about Monty, to understand why he acts in this way. In a number of ways he's afraid, he's worried, and he's ashamed. And after a time he wants to change, he wants to to better, but it's hard for him when all that fear is still there, weighing him down.

This was a more serious book than I'd expected, more weighed down in personal struggle and unexpected consequence. There were less moments of excited gallivanting and more of Monty, Percy, and Felicity running for their lives. But I still found it to be an intriguing story, rich with history, character, and conflict.