Me on Horimiya Volume 3 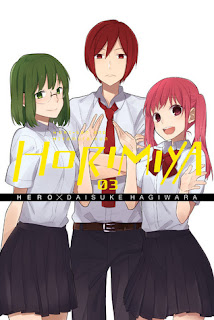 The longer Hori and Miyamura keep each other's secrets, the closer they get. When Hori blurts out an inadvertent "I like you," will Miyamura respond in kind? Or could the slip up spell the end of their friendship...?

Horimiya Volume 3 is the start of Hori-san and Miyamura-kun's world opening up, more and more people entering what was their space, all while the two of them wonder about their feelings. If they actually do like each other more than just friends.

The cast of characters is slowly expanding. More people are creeping their way into Hori and Miyamura's space where once it was just the two of them, sometimes with Ishikawa or Yoshikawa or Hori's brother Souta. Now the student council, Sakura and Remi and president Sengoku, are popping up more and more in their circle of friends. The three of them have their blunt questions, wondering if Hori and Miyamura are actually dating, leaving Ishikawa to be flustered while still nursing a crush on Hori. And then comes Miyamura's old middle school friend Shindou and his loud and boisterous ways, leaving Miyamura feeling awkward and unsure. Unbelieving. He still can't get past those depressing middle school days.

Things are starting to get serious, get real for the two of them. Those feelings they have, it's getting harder to not say them. But at the same time, all this closeness and comfortableness, they don't want to ruin it. Change their relationship. They sort of have one of two choices to make: never say anything or take the risk. Because which would be more painful and awkward, saying nothing or saying something? This manga, this series, nails awkwardness and friendship and making connections. It's at times sweet and funny, serious and honest. A definite must read.