Me on Refuge for Masterminds 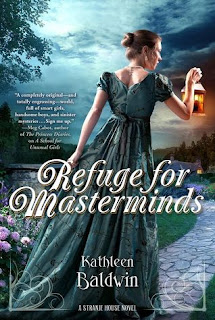 Napoleon's invasion of England is underway and someone at Stranje House is sneaking information to his spies. Lady Jane Moore is determined to find out who it is. If anyone can discover the traitor, it is Jane—for, according to headmistress Emma Stranje, Lady Jane is a mastermind. Jane doesn't consider herself a mastermind. It's just that she tends to grasp the facts of a situation quickly, and by doing so, she's able to devise and implement a sensible course of action. Is Jane enough of a mastermind to save the brash young American inventor Alexander Sinclair, her friends at Stranje House, and possibly England itself?

Refuge for Masterminds is a smart, fast-paced mystery, the continuation of the mission of the young girls of Stranje House. A mission of life or death, a mission to keep England safe from Napoleon's clutches.

Jane is intelligent. She's perceptive, methodical. She can quickly grasp the severity of the situation and be a strong voice of reason. She can be practical when those around her are often caught up in emotion and personal feelings. She just doesn't see her own appeal, doesn't see why the other girls or Miss Stranje would really want her around. Doesn't see why anyone would find her appealing or attractive. And so she's learned to sharpen her tongue and not expect much from other people. People like her useless brothers. But this foolish American inventor unnerves her. Mr. Sinclair is brash and rough, he doesn't always act correctly when around young ladies or titled peers. Theirs is a battle of wits, of barbs and jabs, if only because Jane is too afraid to admit what she really thinks of him. But Jane isn't willing to take that kind of gamble.

This definitely continues what the first two books in the series did. Introduce a young woman with a curiously helpful skill who feels out of place and restricted by society, highlight the political and martial worries of the time, reveal that spies are afoot and plots and plans are being hatched. Show the young woman that her skills are useful, that she has a purpose, and that she's allowed to be the person she wants to be. I was excited to read this third book, see all the young ladies continue their work while being in a wholly unfamiliar place, and I'm hoping that the next book will be more of the same.