Me on The Gauntlet 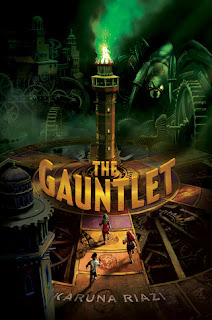 When twelve-year-old Farah and her two best friends get sucked into a mechanical board game called The Gauntlet of Blood and Sand—a puzzle game akin to a large Rubik's cube—they know it's up to them to defeat the game's diabolical architect in order to save themselves and those who are trapped inside, including her baby brother Ahmed. But first they have to figure out how. Under the tutelage of a lizard guide named Henrietta Peel and an aeronaut Vijay, Farah and her friends battle camel spiders, red scorpions, grease monkeys, and sand cats as they prepare to face off with the maniacal Lord Amari, the man behind the machine. Can they defeat Amari at his own game... or will they, like the children who came before them, become cogs in the machine?

The Gauntlet is thrilling and adventurous, a tale of riddles, of tricks and trials. Of secrets and smarts and the strength to keep on going when everything's working against you.

Farah is smart and perceptive. Once inside The Gauntlet, once following the path set out before her, she understands the seriousness of the situation. That she and her friends must complete the puzzles if they want to make it out alive. But that doesn't mean she's not worried about Ahmed, her younger brother who raced off into the game ahead of her, wandering through a world they've never been to. Who knows who he might come across, what danger he might end up in? As Farah worries, she and her friends are racing against time, solving the puzzles of the Architect.

There are wonderful descriptions in this book. From the scenery, the buildings that make up the souk and the palaces, the invasiveness of the sand in everyone's shoes, the mad rush of the wind of a sandstorm, to the smells and the flavours that invade the senses. Ginger and mint, warm food like stewed vegetables and lamb, sweets coated in honey and nuts.

The tone of this book, the voice, has gorgeous charm. It's enchanting and bright in a world of impossibility and danger. There's Farah's initial worry over her new school, suddenly being the only girl who wears the hijab in her class, then her worry about Ahmed, that they can't solve puzzles and save him at the same time, but her determination doesn't waver. As worried as she is, she knows she has to do it. That she can do it. I would definitely recommend this to middle grade readers who love magic and games and the impossible.

(I received a finished copy of this title to review from Simon & Schuster Canada.)
Posted by Lindsay at 4:00 AM