Me on The Edge of the Abyss 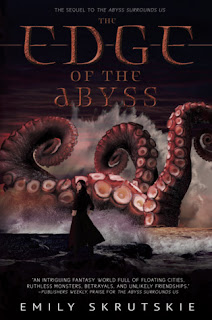 Three weeks have passed since Cassandra Leung pledged her allegiance to the ruthless pirate-queen Santa Elena and set free Bao, the sea monster Reckoner she'd been forced to train. The days as a pirate trainee are long and grueling, but it's not the physical pain that Cas dreads most. It's being forced to work with Swift, the pirate girl who broke her heart. But Cas has even bigger problems when she discovers that Bao is not the only monster swimming free. Other Reckoners illegally sold to pirates have escaped their captors and are taking the NeoPacific by storm, attacking ships at random and ruining the ocean ecosystem. As a Reckoner trainer, Cas might be the only one who can stop them. But how can she take up arms against creatures she used to care for and protect? Will Cas embrace the murky morals that life as a pirate brings or perish in the dark waters of the NeoPacific?

The Edge of the Abyss is full of danger and tension, a mission of survival. A story of pirates, of an ocean that now feels like home, and the monsters that lurk beneath the waves.

Cas is full of conflict. Now on the pirate ship Minnow, under the rule of Santa Elena, she's hard at work proving herself. Proving that she has skills beyond those of a Reckoner trainer, because that's not what's needed anymore. For his own safety, Cas left Bao on his own, making sure he'd never be used as a pirate's weapon again. But is it really the life she wants to lead now? She's also struggling with her feelings for Swift, the rough and tumble pirate girl who's saved her life but also ruined it, poisoning the Reckoner Cas had been with for most of her life. She's not sure what to do, how to act, except follow Santa Elena's commands so she can stay alive.

I love how this book was made up of so many morally grey areas. Cas has to confront a number of things, especially pirate things, that she doesn't quite agree with. Like the raising of Reckoners by pirates. Like the underhandedness and thievery of pirates. Like the doublespeak that Santa Elena deals in when teaching her trainees. Like her feelings for Cas that don't always weigh as much as her fury at knowing Cas was behind the events that first brought her to the Minnow. But now comes the biggest conflict of all for Cas. Either stand with the pirates and destroy the illegal Reckoners that broke free and grew up feral in the NeoPacific, or stand by as they tear every single ship apart. And Cas now has to make those decisions.

This duology is dark and deadly and complicated. It's tense and brutal, all about survival and morals. All about a girl trying to stay alive and the girl she has feelings for. But what are those feelings? Love? Hatred? A combination of the two? I was satisfied both by the ending and that it was left slightly open. The world-building here, a mixture of futuristic and impossible sea monsters and piracy, has left a world that feels believable, and so of course Cas's story would continue on. But I feel like I was left with a good ending here. I would definitely recommend this duology if you're looking for something different with a slight Pacific Rim vibe to it.

(I received an e-galley of this title to review from Flux through NetGalley.)
Posted by Lindsay at 4:00 AM