Me on The Upside of Unrequited 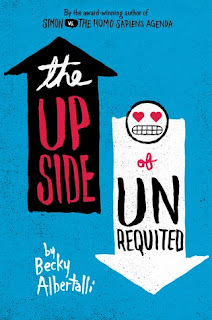 Seventeen-year-old Molly Peskin-Suso knows all about unrequited love. No matter how many times her twin sister, Cassie, tells her to woman up, Molly can't stomach the idea of rejection. So she's careful. Fat girls always have to be careful. Then a cute new girl enters Cassie's orbit, and for the first time ever, Molly's cynical twin is a lovesick mess. Meanwhile, Molly's totally not dying of loneliness—except for the part where she is. Luckily, Cassie's new girlfriend comes with a cute hipster-boy sidekick. If Molly can win him over, she'll get her first kiss and she'll get her twin back. There's only one problem: Molly's coworker, Reid. He's a chubby Tolkien superfan with a season pass to the Ren Faire, and there's absolutely no way Molly could fall for him. Right?

The Upside of Unrequited is clever, current, and romantic. It's all about family, about relationships and crushes, about perceptions and observations. About wanting something when you feel like society keeps telling you you can't have it. And being willing to take the risk.

Molly is smart and creative, observant and opinionated. Her inner voice asks important questions, wonders about important things. Like how society screws over fat girls, classifying them as great friend-material but not romance-material. She wonders about the things teen girls wonder about, like dating and sex, like is it okay to like certain guys. She's glad she has her twin sister Cassie, who's bold where Molly is quiet. But Molly's not sure how to feel when Cassie's suddenly serious about a girl, when they become girlfriends. When Cassie doesn't share everything like they always did before.

I love how this book deals with rejection and unrequited feelings, the crushes that Molly has had on the boys she's met. Crushes are seemingly simple, they're a twinge in the stomach, a flutter. They make you nervous and awkward. And that's it. You don't act on them if you're Molly, partly because she has no idea how to flit or follow up and partly because she doesn't want to be rejected. Being rejected hurts, especially if you're a fat girl who's been repeatedly told that no one will find you attractive until you lose weight. And so Molly's fine with having unrequited feelings, with having crush after crush. Until the wanting to be part of a couple is more than the wanting to not be rejected. Until the loneliness feels too heavy.

As I read this, I couldn't get over how current, relevant, and open this book felt, these characters felt. There's frank and honest talk about sexuality, attraction, anxiety, body imagery, religion. And I couldn't get over how familiar Molly felt. Because I remember being that girl in high school. A fat girl who had crushes but never boyfriends. Who felt out of place at parties. Who wanted to be part of something but always felt awkward about it. This book is charming and honest, blunt and hopeful. This is a must-read. Hands down.