Me on Wires and Nerve 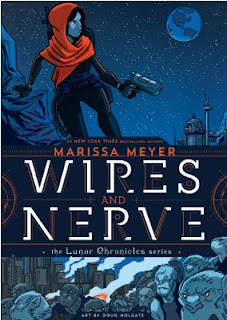 In her first graphic novel, bestselling author Marissa Meyer extends the world of the Lunar Chronicles with a brand-new, action-packed story about Iko, the android with a heart of (mechanized) gold. When rogue packs of wolf-hybrid soldiers threaten the tenuous peace alliance between Earth and Luna, Iko takes it upon herself to hunt down the soldiers' leader. She is soon working with a handsome royal guard who forces her to question everything she knows about love, loyalty, and her own humanity. With appearances by Cinder and the rest of the Rampion crew, this is a must-have for fans of the bestselling series.

Wires and Nerve is an exciting new installation to a well-established series. As a graphic novel, readers now get the chance to see the futuristic landscape of Earth and Luna, and they get to follow a beloved side character on her own mission.

Iko is back! In the Lunar Chronicles, Iko was an exciting side character. Funny and loyal, intelligent and supportive. Quirky. Seeing Iko as the main character here is exciting. She's an android currently inhabiting the body of an escort-droid and she's ready to help out her best friend Cinder in any way she can. And that currently means hunting down some rogue lunar soldiers. Physically she's strong, mentally she's... an android. Personally? She's not like other androids. She's determined to help Cinder, to do whatever she can in order to lessen the burdens on Cinder's shoulders. She can take a few punches or knife wounds. But she's not invincible. She's also a little bitter. After all, she helped Cinder and the others so much when it came to stopping Levana's evil plans, but because she's an android her name was barely mentioned. Iko's sure she can handle this job from Cinder, this tracking down of lunar soldiers, even if a certain royal guard has his reservations.

The artwork is a good mixture of epic science fiction backgrounds and expressive characters. Knowing the series, I was excited to see what the characters would look like, like Cinder's robotic hand and Wolf's lupine modifications, like Captain Carswell Thorne's charming smile. And I was excited to see how this futuristic Earth and kingdom on the moon would look, the technology and the spaceships. The different uniforms, Scarlett's farm in France. And the moments where it's just Iko thinking to herself. The things she looks at, the ways she reacts.

I like the premise of this book, that after the revolution on the moon, after Cinder and her friends fighting back against the tyranny and despair that radiated from Levana, there's still battles to be fought. All those still loyal to Levana, mutated lunar soldiers and secret operatives, are still fighting. Fighting for their place, for their revenge. Just because a tyrant is overthrown doesn't mean everyone's opinions instantly change. As much as the Lunar Chronicles has a happy ending, it's great to see that everything wasn't suddenly made perfect. There are still things to do, dangers to watch out for and enemies to fight. Fans of the series will definitely enjoy this new installation, enjoy seeing the adventures and the struggles continue. And the banter between Iko and Kinney.