Me on Queens of Geek 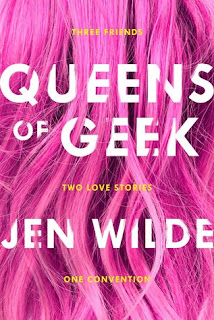 When BFFs Charlie, Taylor and Jamie go to SupaCon, they know it's going to be a blast. What they don't expect is for it to change their lives forever. Charlie likes to stand out. SupaCon is her chance to show fans she's over her public breakup with co-star, Reese Ryan. When Alyssa Huntington arrives as a surprise guest, it seems Charlie's long-time crush on her isn't as one-sided as she thought. While Charlie dodges questions about her personal life, Taylor starts asking questions about her own. Taylor likes to blend in. Her brain is wired differently, making her fear change. And there's one thing in her life she knows will never change: her friendship with Jamie—no matter how much she may secretly want it to. But when she hears about the Queen Firestone SupaFan Contest, she starts to rethink her rules on playing it safe.

Queens of Geek is smart and honest, expressive and openly diverse. It's a great look at how people with so many vast differences can come together because of similar interests, and a great look at what can happen when you take risks.

Charlie is kind and expressive. Explosive, personable. SupaCon means furthering her acting career, it means fan interaction, but it also means spending time with her ex and co-star Reese while nursing a serious crush on fellow actress and YouTuber Alyssa. She's torn between getting to know Alyssa and being forced to spend time with Reese becasue both the studio and the movie's fan base want it so much. Taylor is smart and supportive, creative and focused on the fantastical. SupaCon is her chance to meet her favourite author, her chance to tell her how much the books mean to her, how much she's inspired her. But then the signing ends early and Taylor's only chance to meet the author is a fan contest, which means being up on stage in front of hundreds of people, which might be too much of a change for her to handle. Especially on top of her growing anxiety in terms of change and college and possibly not being with her other best friend, and crush, Jamie.

I like the back and forth between Charlie and Taylor's points of view. Their stories, their journeys, are rather different. Which is great to see. There's no one way to be a teen girl, there's no one way to interact with the world and work to make your mark on it, and there's no one way to fall in love. There isn't a specific gender you have to fall in love with. You don't even have to fall in love if you don't want to. Taylor and Charlie aren't perfect, they still get anxious, get worried. They panic and say the wrong things. They don't want to get hurt and make decisions that upset and hurt others. But they do learn. It can be really hard to let go of your neuroses and your worries, to stand up to the people who hurt you. It can be hard to ignore the hate. But friends and family, other support structures, are always there to help you.

This book brings up so many current topics, important topics, like intersectionality and feminism, like body-shaming and mental health, like sexuality and internet fame. I hope teens read this and feel empowered, especially teen girls. Do what you want, like what you like or who you like, and don't let anyone take that enjoyment from you. I would recommend this to fans of Fangirl and All the Feels, those looking for diversity in contemporary YA, and those who love being part of a fandom that gives you the chance to breathe and express yourself.